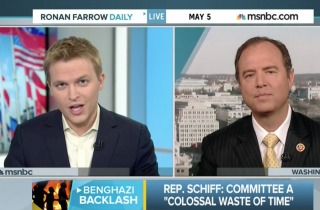 Our betters who claim to be beyond partisan politics will sometimes flatter themselves by asserting that theirs are the only legitimate concerns about this or the other issue. Those who do not share their concerns, our post-partisan exemplars say, are evincing base or prejudiced motives. That phenomenon is often apparent when the debate over the White House’s response to the Benghazi attacks is revived.

Take, for example, MSNBC’s latest host Ronan Farrow who determined on Monday that there are legitimate avenues from which to criticize the federal government’s response to the Benghazi attack. In Farrow’s estimation, though, the real issue pertaining to that deadly attack is Congress and their refusal to appropriately fund embassy security.

In a segment on MSNBC ostensibly about the newly released documents pertaining to the response to Benghazi, which entirely ignored the newly released documents pertaining to Benghazi, Rep. Adam Schiff (D-CA) began by noting that the real issue at play is that the perpetrators of that attack remain at large. But even this critique casts to dark a shadow on the White House’s comportment in the wake of that attack for Farrow. The MSNBC host immediately shifted the burden of culpability for the deaths of four Americans from the executive and onto Congress.

“I think there are elements of the right-wing that have sincere concerns about this, but those concerns are, as you say, a distraction from the real issue here,” Farrow told Schiff. The congressman agreed and said that the White House has asked for more embassy security funding than the “current majority has been willing to provide.”

Farrow allowed Schiff the opportunity to counter the “Republican element” which denies that resources for security at this facility were the key issue. The MSNBC host asserted that he personally worked with slain Libyan Ambassador Chris Stevens, that Hillary Clinton herself had sought more funding for embassy security, and that he wrote for The Atlantic about the issue of underfunded embassy safety in 2011.

Farrow is new to this hosting thing, so he may not be entirely up to speed on the issues upon which he so confidently opines. Clearly the host is not aware that the premise of this segment was thoroughly debunked in May of last year.

It was Sen. Barbara Boxer (D-CA) who, in a Senate floor speech and a subsequent opinion article in The Huffington Post, attempted to shift blame for Benghazi onto House Republicans. In response to her charge that a lack of funding for embassy security led to the deaths of four Americans, The Washington Post’s Glenn Kessler took a look at this issue. “Was security in Benghazi affected by the State Department budget and did Republicans cut funding in a way that affected security?” he asked.

First, the claim that funding was “cut,” is inaccurate. Funding for embassy security has increased year over year, but it was not raised to the levels the White House requested (which, in Boxer and Farrow’s estimation, amounts to a cut).

Second, the Accountability Review Board study from which Farrow regularly quotes did say that this facility suffered from a lack of security staff. But it was not embassy security funding that was the issue. Why? The Benghazi facility was not an embassy.

“One huge problem was that the facility was deemed temporary — as we have noted, most of the officials there were working for the CIA, not State — and thus it could not be funded with standard overseas building funds,” Kessler noted, adding that America’s presence in Benghazi in 2012 was functionally a CIA operation. He observed that the ARB recommended greater flexibility with the use of funds for temporary outposts.

Finally, to concluded that security funding was the problem which led to the Benghazi deaths contradicts the government officials who testified to the contrary.

Asked directly if budgetary issues contributed to the lack of preparedness at the Benghazi outpost in October 2012, Deputy Assistant Secretary of State Charlene Lamb replied, “No, sir.”

Pressed on whether Lamb’s assessment was widely shared by her colleagues at State, Regional Security Officer Eric Nordstrom said they were. “Yes, she said that resources was not an issue,” Nordstrom said. “And I think I would also point to the ARB report, if I’m not mistaken, that they talked to our chief financial officer with D.S. [Diplomatic Security], who also said that resources were not an issue.”

After confidently repeating a series of falsehoods crafted with the aim of shifting blame for the deaths of American servicemen away from the commander-in-chief and onto a House of Representatives that had not been in Republican control for a full term, Farrow concluded by lecturing Republicans about their attempt to “score cheap political points.”

It was probably wise of Farrow not to bring up any of the new details involving the White House’s response to the Benghazi attack. This segment revealed that Farrow should read up on the issues that were litigated last year first.