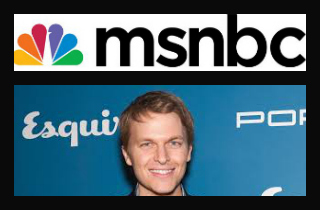 On Wednesday afternoon, MSNBC officially announced that human rights activist and lawyer Ronan Farrow will be joining the network as a weekday host beginning in early 2014. In addition to hosting a show, Farrow will contribute to the network’s website and other platforms in the NBC News family.

“Ronan has established himself as a provocative, independent journalist capable of challenging people’s assumptions and empowering audiences,” MSNBC chief Phil Griffin said in a statement. “His show will be a game changer for MSNBC, representing a fresh approach to how we deliver news.”

In the same statement, Farrow said of the news: “This is a new generation of news show for a new, more engaged generation of viewers. It’s a show about why the news matters to you – and what you can do to be a part of the story. I’m excited to shake up people’s expectations for cable news. And to get a ton of Twitter followers.”

At age 25, Farrow might be one of the youngest cable news hosts. Before this gig, he was a foreign policy official with the Obama administration, and worked for two years as a diplomat focused on the conflict in Afghanistan and Pakistan. His writings on human rights have appeared in the New York Times, Los Angeles Times, and the Wall Street Journal. Forbes has ranked him number one among its “30 Under 30” most influential people in law and policy.

Farrow is the son of famed actress Mia Farrow. He recently came into the national spotlight when several news outlets began speculating whether he was actually the son of Woody Allen or the late blue-eyed crooner Frank Sinatra.

His new show will air weekdays at an unspecified time, beginning in early 2014.