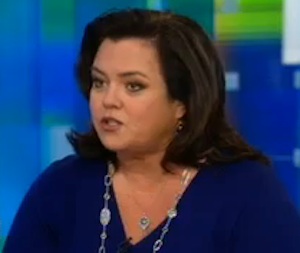 Rosie O’Donnell spoke with CNN’s Piers Morgan Tuesday night about the GOP race, and slammed the anti-gay rhetoric being espoused in some of the various campaigns. “We’re a backward nation in many ways,” O’Donnell observed. “That’s one of the ways most evident nowadays especially with the election — to think you can turn on the presidential debate and you can have people actually say they think being gay is wrong is shocking in 2012. It’s shocking to me.”

RELATED: Rick Perry Tells Bisexual Teen Why He’s Opposed To Gays In The Military: Homosexuality Is A Sin

Morgan asked the OWN host what she thought of the Republican race in general; O’Donnell was unimpressed.

“You know, it’s a sad lot of contenders,” O’Donnell remarked. “It’s not the Republican Party that, you know, I grew up believing was one of the two viable ways to lead the nation in America. It just seems to be almost too much entertainment and no one qualified. That’s the saddest thing. There doesn’t seem to be any qualified…I wish that there would be a real contender so there could be real issues brought up and not everyone sidetracked with these absurd anti-gay rhetoric or whether or not evolution is real.”

“I remember being at home and announced we were engaged and being in Chicago and getting overwhelming support from everyone and watching this ad saying I don’t believe you people have the same rights as other people in this country. That’s not what America was founded on. It was hurtful and shocking. In the wake of teen suicides and gay bullying, I don’t understand why politicians or anybody thinks they can get away with that.”