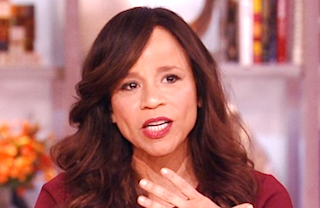 Soon, there will only be one Rosie on The View. Variety is reporting that Rosie Perez, who joined the daytime talk show as a permanent co-host will not be returning to the show, as scheduled, after what was supposed to be a one-month hiatus to appear in Larry David’s Broadway debut Fish in the Dark.

In December, Perez pushed back against reports of infighting amongst The View’s new hosts, calling the suggestions “insulting” and said that while male pundits have “debates,” when women get heated “it’s called a cat fight.”

“But at the end of the day we all love each other and respect each other, so, you know, it’s just insulting,” she said.

We have reached out to ABC for more information and will update this post accordingly.

Just yesterday, one of Perez’s fans asked when she would be returning to the show and she responded by saying “soon”:

“@lilablue22: @rosieperezbklyn @TheView. OK Rosie! It's time to come back. You've been away too long!!! Miss you!” Very sweet… Soon.

Rosie Perez is currently in rehearsal for her Broadway play for the month of January. Her status with the show has not changed.