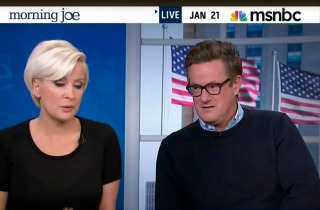 Even MSNBC host Joe Scarborough can be taken out of context by his network when the need to make a political point against Republican officeholders is the paramount objective.

Take, for example, an exchange on Tuesday centered on Hoboken Mayor Dawn Zimmer’s claim that New Jersey Gov. Chris Christie’s administration attempted to strong-arm her into approving of a development project by threatening to withhold federal Hurricane Sandy aid from her city.

Scarborough apparently believed that the charge made by Zimmer against the Christie administration was so egregious that it amounted to a violation of federal law and could be prosecutable. Scarborough was so committed to this point of view, in fact, that he engaged in a brief but heated battle with his cohosts and panel guests over the gravity of Zimmer’s allegations against the Christie administration.

“I think the bridge is an embarrassment, and it’s political thuggery if that’s proven,” Scarborough said on Tuesday in an edited clip broadcast on MSNBC’s Jansing & Co. “It’s a federal crime when you tell somebody you support – ‘I tell you what, we’ll give you federal – we will channel federal hurricane money to your city if you support a development project.’”

Those are serious charges from a serious person. When you’ve lost Joe Scarborough, as they say, you’ve lost the middle. And Jansing used that clip to set up a conversation with a former New Jersey attorney general to discuss the criminal charges which might result from both the scandals with which the governor and his administration are contending.

But a casual review of the segment featured on Chris Jansing’s program, via HotAir, provides a little more context.

Scarborough was saying that Zimmer’s charges were quite serious. He made this claim, however, as his panel launched into an attack on the press – MSNBC included – for credulously allowing Zimmer and her diary to be “propped up” as evidence of corruption without extending the Christie administration the benefit of the doubt or requiring that Zimmer meet the requisite burden of proof to support her allegations.

Scarborough made the excerpted comments while arguing with TIME Magazine reporter Mark Halperin about whether the most serious alleged scandal involving the Christie administration was the lane closures on an interstate bridge by senior aides or the threat to withhold federal aid. Scarborough framed the argument as a prosecutor would, in a solemn tone to emphasize the severity of the charges. Not coincidentally, that’s the clip that made the cut for Chris Jansing’s program.

But allow the segment to unfold further and we find that Scarborough was playing the devil’s advocate in a fashion.

“The notion that she’s being propped up by this network and others to make allegations against a governor, at a time when he is in a political scandal, just stinks to me,” Nicolle Wallace said.

“With no one at – like everybody taking at face value everything that she says. That’s what bothers me,” Scarborough agreed.

Later in the clip, Scarborough expressed his incredulity in even clearer terms. “If you’re a public official and somebody makes that offer to you, at least the people I hung out with in Washington D.C. — that is so cut-and-dry. You would laugh at them in their face,” Scarborough asserted describing that scenario as an obvious attempt at a “shakedown” which would prompt most politicians to speak with a federal prosecutor immediately.

“I wouldn’t go running off and write in my diary,” he continued, “and then show up on TV three months later when Chris Christie’s political career is like going up in flames.”

“Maybe she’s telling the truth,” Scarborough concluded. “All I’m asking is for somebody to ask a tough question or two to this lady who has gotten a free ride for days.”

Judging from the full context of the clip that was tightly edited for broadcast on Jansing’s program, it seems that Scarborough is as concerned –- if not more concerned -– about the veracity of Zimmer’s allegations as he is about the severity of the charge itself. And there are plenty of questions about Zimmer’s allegation that need answering.

But Scarborough’s implicit attack on his network, one which broke the Zimmer story in the first place, is understandably one that MSNBC would rather not promote.