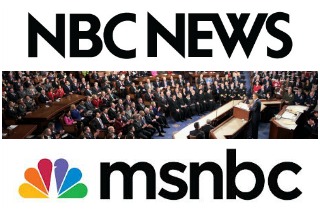 There was a time when there was a clear distinction between NBC News and MSNBC. While MSNBC’s editorial slant was obvious, NBC News made an effort to ensure that its news coverage remained neutral enough so that they did not alienate non-liberal viewers. That distinction is seemingly gone.

During Brian Williams’ Tuesday night State of the Union Address coverage for NBC Nightly News, reporters Chuck Todd and Andrea Mitchell made no effort to broadcast neutral commentary. Instead, they echoed themes that had previously been broadcast on MSNBC, only to a much larger audience.

Discussing the importance of the State of the Union, Mitchell took the opportunity of this coverage to repeat a dubious and unambiguously offensive assertion she had made earlier in the day on her own MSNBC show.

“One quick historic note,” she allowed herself. “It was the State of the Union back in 2002 when George W. Bush said those three little words, ‘Axis of Evil,’ including Iran, which was aligned against us with the Taliban and that blew up any hope of diplomacy with Iran until now.”

Disregard the fact that Mitchell seeks to conflate Iran’s post-9/11 risk-mitigating behavior as the equivalence of an alliance; or that Mitchell seems content to take the word of the administration that the White House’s push for diplomacy today is fruitful in spite Iranian officials’ statements to the contrary; or the fact that the administration has refused to release the text of a supposed breakthrough deal.

Even overlooking these points, Mitchell might have shown some respect for the hundreds of Americans killed as a result of Iranian-sponsored terrorism from 1979 – 2002 in her tendentious effort to litigate a 12-year-old political gripe.

“Three years ago after the shooting with Gabby Giffords, and for a couple State of the Unions in a row, everybody found a bipartisan date,” he recalled. “There was more of a dignified feeling about the guests you would invite. Boy, you can tell things are a lot different now when you’re inviting Duck Dynasty stars.”

Never mind that, as National Review’s Kevin Williamson scathingly observed, the pomp surrounding the State of the Union presently has all the dignity of walking backwards out of the queen’s chambers and is unbecoming of a republican government. For Todd, it is the invitation of a reality show star –- a conservative one at that -– to the sacred House chamber that has sapped dignity from this event.

Judging from this two-minute segment, the distinction between MSNBC and NBC News that was once self-evident has seemingly vanished. It makes you wonder how long it will take for NBC executives to recognize the redundancy and simply consolidate the two entities.