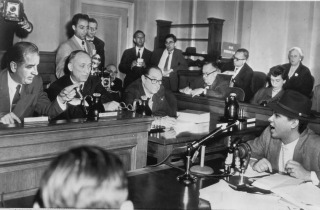 The moral righteousness of resistance to Sen. Joe McCarthy’s (R-WI) and the House Un-American Activities Committee remains vibrant in the imaginations of modern progressives. McCarthy and his congressional compatriot’s myopic campaign to expose communists in high-profile areas of American life was opposed by liberal dissenters who viewed his investigation as an infringement on their rights of free association, speech, and even thought.

The modern progressive movement admires their predecessors’ stand against McCarthy so deeply that references to that inauspicious period of American history are regularly deployed in liberal publications and media outlets.

Those noble principles apparently go right out the window when Democrats face what increasingly appears to be a catastrophic political landscape heading into the 2014 midterm election cycle. Political handicappers beginning to suggest Republicans have better than even odds of recapturing the upper chamber of Congress in November as Democratic officeholders struggle to defend the political millstone that has become of the Affordable Care Act. Rather than surrender to their fates, Democrats have taken to identifying their own shadowy boogeyman wrecking America from within: the libertarian billionaire brothers Charles and David Koch.

“The base of the Democratic party, which provides the lion’s share of campaign contributions and activist hours to the party’s cause in midterm elections, loathes the Kochs,” The Washington Post’s Chris Cillizza noted in February when he identified the anti-Koch campaign as a cornerstone of the Democratic Party’s election efforts. “ The base views the duo as everything wrong with the American political system where a handful of individuals are able to exert vast influence over elections simply because of their wealth.”

“The message is clear: The Koch brothers are the real enemy, not the Republican party in November,” he added.

That strategy came alive on February 26, when Sen. Harry Reid (D-NV) was driven to rhetorical excess arguably unseen since U.S. Army Counsel Joseph Welch pointedly asked McCarthy whether he had “left no sense of decency.”

Taking to the floor of the U.S. Senate, Reid called these two private American citizens “un-American” for exercising their constitutionally protected rights of free expression.

“Are the Koch brothers right to degrade our Democratic process with lies?” Reid asked. “It’s time that the American people spoke out against this terrible dishonesty of these two brothers, who are about as un-American as anyone that I can imagine.”

Reid is not alone in revitalizing this once-detested attack on the Americans over their political activities. On Wednesday, Rep. Elijah Cummings (D-MD) indulged in an outburst during a congressional committee hearing into the allegations that the Internal Revenue Service intentionally limited the amount of political activity that tea party groups could engage in during the 2012 election cycle.

“I am a member of a Congress of the United States of America,” Cummings exclaimed, directing his outrage at his colleague, Rep. Darrell Issa (R-CA). “You cannot just have a one-sided investigation. There is absolutely something wrong with that, and it is absolutely un-American.”

Issa contended, before walking out of that hearing in protest, that he had provided Cummings with the opportunity to submit his questions to former IRS commissioner Lois Lerner, who had once again exerted her Fifth Amendment rights against self-incrimination.

“Chairman, what are you hiding?” Cummings replied.

“What are you hiding?” The implication is clear. There is a conspiracy afoot. Ill-defined malefactors are busily at work behind the scenes corrupting the system and rigging the game. That kind of behavior is “un-American.” It all sounds rather familiar.

The modern Democratic Party’s origin myth is so closely tied up in their opposition to McCarthyism, they may not be able to objectively view how these actions reflect on them. If they could look objectively in a mirror, they might see that they are becoming precisely what they once opposed.

[Correction: This post has been updated to reflect that, as a senator, Joseph McCarthy did not conduct the House Un-American Activities Committee.]
[Photo via Arcata]