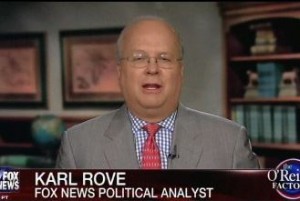 Karl Rove stopped by The O’Reilly Factor tonight to talk about getting heckled during a speech he gave at UMASS-Amherst this week by people calling him a “murderer” and a “terrorist.” Guest host Greg Gutfeld talked with Rove about how liberals on college campuses promote ideas like tolerance and equality but don’t really have respect for people who hold different political opinions. He asked the hecklers, “What are you afraid of?”

Gutfeld mockingly asked Rove why he seems to be so “evil” and “and “easily heckle-able guy.” Rove made it clear that the vast majority of students in attendance were respectful, aside from the few “lunatics” who shouted him down. He said that “very ultra-liberal people” always say they support ideas like tolerance and respect, but really aren’t tolerant and “don’t worry about other people’s rights.”

Gutfeld asked why this kind of heckling does not happen to liberal speakers from conservatives, Both he and Rove agreed that conservatives are much more respectful, with Rove asking the heckers directly, “What are you afraid of?” He revealed that the head of the protestors e-mailed the head of the college Republican group and asked them to disinvite Rove. Rove was amazed at this, and said that hecklers need to “sit down, shut up” and save their criticisms for the Q&A session at the end.

The two men also pointed out that while people like Rove and members of the military are rejected from college campuses, but people like the rapper Tyga, who’s been criticized for misogynistic lyrics, are still going ahead to stop by campuses.