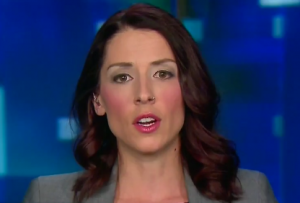 While two RT anchors spoke out against network editorial policy this week, one of them stayed at their jobs, and Abby Martin joined Piers Morgan Wednesday night after delivering an off-script commentary about Ukraine, and ended up going on several tangents about the “corporate media” complex and the self-censorship that exists at American networks “beholden to advertisers.”

Martin told Morgan, “I knew going into that that I could put my job on the line, considering how the corporate media has fired multiple anchors for simply speaking out against the Iraq War.”

She insisted that her bosses give her “complete editorial freedom,” and when Morgan asked about other parts of the programming, she shot back that it’s “no different than any other corporate media station,” going off on how there are just a few corporations controlling the vast majority of media Americans consume.

Martin was bothered by seeing “the corporate media coverage almost wanting to revive the Cold War” and continuing to “warmonger and fearmonger the American people.” She asked Morgan, “Why do I have to work for RT to tell the truth about corporations and the US government? I mean, seriously, you guys are beholden to advertisers that you cannot criticize.”

Morgan shot back, “I’m free to say what the hell I like!” Martin laughed, but insisted self-censorship is still a big problem in the media.