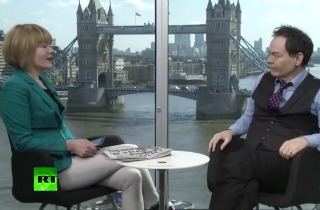 The rhetoric emanating from the propagandists employed by RT seems to have become increasingly frenetic as Russia has grown more isolated. With Moscow backing unidentified but well-trained service personnel in Eastern and Southern Ukraine who are actively destabilizing those regions, actions which some believe are designed to create pretexts which would justify military invasion, Russia’s apologists at RT are doing everything they can to deflect attention from their master’s clear violations of international laws and norms.

In that effort, what is probably the single most offensive and simultaneously bizarre clip has emerged from that disinformation outlet.

The clip features two members of The Keiser Report, an anti-American program featuring American commentators who are broadcasting from abroad.

To digress slightly, this was a segment that RT clipped and uploaded to YouTube themselves and sent out via their official Twitter account. Therefore, it is even more confusing as to why it seems to begin mid-sentence. In the clip, The Keiser Report‘s Stacy Herbert opens by reacting to a story:

“Yeah, or they end up chained to a table in a waffle house,” Herbert says.

At first, it occurred to us that this could be a plot point from an upcoming Quentin Tarantino film. But a quick Google search revealed that this was the first time in history anyone had ever put those words together in a sentence:

It is difficult to be that original in the modern era, so kudos to RT.

But the humor, sadly, ended there as The Keiser Report‘s eponymous host, Max Keiser, went on to indulge in an anti-capitalist tirade so crude and unsophisticated that it would have made Molotov cringe.

“The capitalist modle, at this point, is just stealing money,” Keiser asserted. “What they leave behind is a scorched earth.”

“Those trailer parks are now — the next stop for those people will be prison and then the incinerator,” he continued. “That’s the way fascism works. Capitalism in its end game. And that’s what we see in the United States.”

This, too, required some Googling. It is possible that he could have been referring to this story from last week — a Bloomberg profile about the tragic conditions in the persistent down economy creating increased returns for investors who leased land for use as trailer parks. But it’s not a certainty that this is the subject to which these two were referring.

After coming up short, it made sense to appeal to RT’s YouTube page for clairty. This is what they wrote as a brief introduction to the topic at hand:

In this episode of the Keiser Report, Max Keiser and Stacy Herbert discuss the American Dream as being chained to the booth in the waffle house as cogs in the wheels generating income for Wall Street sharpies and the poverty of this century in which the beggar is a reminder of nothing.

But Keiser did say something about trailer park residents heading for “the incinerator,” which suggests that his next grossly offensive comment was, in fact, meant literally.

“They are going to be sent to the privately owned, leveraged buyout, Auschwitz-like conditions in America, thanks Goldman Sachs, J.P. Morgan, and the rest of Wall Street,” Keiser asserted.

“It is estimated that the SS and police deported at a minimum 1.3 million people to Auschwitz complex between 1940 and 1945,” reads an report via the United States Holocaust Memorial Museum. “Of these, the camp authorities murdered 1.1 million.”

Writing in New York Magazine last month, Jonathan Chait brilliantly dissected the mentality that informs those willing to serve as accomplices to Moscow and lend credence to Russian propoganda. Calling them “Putin’s dupes,” Chait noted that the ideological affinity some in the West had for Socialism, which may have animated Russia’s apologists prior to the end of the Cold War, long ago evaporated. Today, the only thing that animates pro-Russian Americans is a non-specific hatred for their own place of birth.

“In the absence of any positive motivating force, Putin’s Russia, which has positioned itself as America’s main rival, has sponged up whatever motley collection of outsiders it can find,” Chait wrote beautifully. “Russia is not the vessel for their ideological fantasies, but merely a placeholder for their accumulated discontent.”

While that is likely true of most, it is clearly not true of all. This clip shows that some are still fighting an insurgent battle on the part of the causes once championed by the Politburo, even though they long ago gave up the fight.