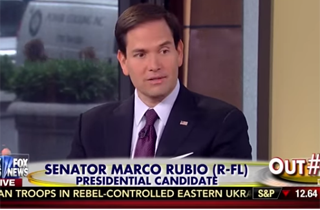 Sen. Marco Rubio (R-FL) was the One Lucky Guy on Outnumbered today, and decided to play around with the definition of the word “nation-building.”

“If a nation expresses a desire to become a democratic nation, particularly one we invaded,” he said, “I do believe we have a responsibility to help them move in that direction.”

He continued: “But the most important immediate responsibility we have is to help them build a functional government that can actually meet the needs of their people in the short and long term.”

“It’s not nation-building,” Rubio quickly responded. “We are assisting them in building their nation.”

Pause for a moment. Let’s read the RAND Corporation’s definition of “nation-building,” from their handy e-book The Beginner’s Guide to Nation-Building:

Nation-building involves the use of armed force as part of a broader effort to promote political and economic reforms, with the objective of transforming a society emerging from conflict into one at peace with itself and its neighbors. This guidebook is a practical “how-to” manual on the conduct of effective nation-building. It is organized around the constituent elements that make up any nation-building mission: military, police, rule of law, humanitarian relief, governance, economic stabilization, democratization, and development.

As he described the difference between “nation-building” and “assistance-in-building-a-nation”, he hit upon the Obama administration’s failures in Iraq and argued that they allowed former Prime Minister Nouri al-Maliki to create a government that excluded Sunni Muslims, thereby facilitating the rise of ISIS. “We have a vested interest” in rebuilding a post-ISIS government in Iraq, Rubio said.