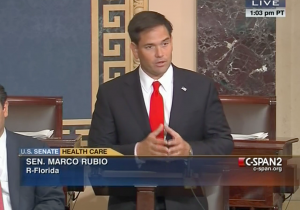 The fight over ObamaCare continues in Congress, and today Florida senator Marco Rubio drew an analogy between the relative unpopularity of the health care law and a widely unpopular product that was so disliked the company that made it had to stop production and go back to the classics. Yes, Rubio thought ObamaCare could take a lesson in public relations from Coca-Cola during the infamous New Coke disaster of the 1980s.

Rubio said on the Senate floor today that the health care law’s backers should “not continue to double and triple down on this thing,” and proceeded to explain what New Coke was and how much of a “disaster” it created for Coca-Cola. New Coke is one of the biggest product backfires of all time, and drew an analogy between the backlash to that product and the new health care law.

Several recent polls have shown a little over a third of the public wants Obamacare repealed, so it’s not quite at “give me the original recipe or I will burn the factories” outrage level yet.

Watch Rubio’s remarks below, via C-SPAN: