Rubio ‘Ready’ to Be President, Gives Hillary Clinton an ‘F’ 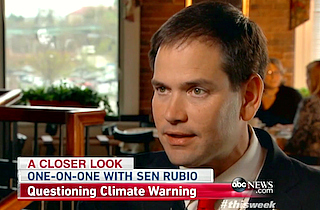 Senator Marco Rubio (R-FL) told ABC News’ Jonathan Karl on This Week with George Stephanopoulos Sunday morning he was “ready” to be president, citing fourteen years of public service. Rubio was considered a top contender in the GOP’s hypothetical 2016 presidential field until his role in the Senate’s immigration reform bill last summer made him anathema to some conservatives.

Rubio conceded that if he ran for president, he would be unable to run for reelection for the Senate. “I believe that if you want to be president of the United States, you run for president,” he said. “You don’t run for president with some eject button in the cockpit that allows you to go on an exit ramp if it doesn’t work out.”

RELATED: Marco Rubio: Obama and Bush Were Wrong About Putin

Rubio has been reestablishing himself in the party via foreign policy, and took the opportunity to criticize former Secretary of State Hillary Clinton’s record. “I’m sure she’s going to go out bragging about her time in the State Department,” Rubio said of the hypothetical Democratic nominee. “She’s also going to have to be held accountable for its failures, whether it’s the failed reset with Russia or the failure in Benghazi that actually cost lives,” he said.

“If you look at the diplomacy that was pursued in her time in the State Department, it has failed everywhere in the world,” Rubio said. “If she is going to run on her record as secretary of state, she’s also going to have to answer for its massive failures.”

The 2016 presidential election is next week.