Rudy Giuliani: I Only Contrasted Romney’s Economic Record With My ‘Far Superior’ One 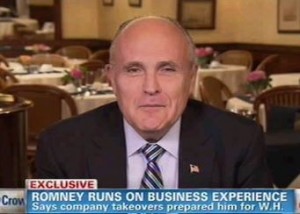 During Rudy Giuliani‘s appearance on CNN’s State of the Union this morning, Candy Crowley confronted the 2008 Republican presidential candidate about his past criticisms of current presumptive GOP nominee Mitt Romney on health care and his economic record. Giuliani argued that he was only contrasting Romney’s record with his own, and said that unlike Romney’s business experience, President Obama was just a “community organizer” and state senator in his earlier life.

Crowley reminded Giuliani that in the past, he criticized Romney for his economic record when he was the governor of Massachusetts, and given that the same line of attack is being used by the Democrats and Obama campaign now against Romney, Crowley had Giuliani jump into Romney defense mode to stick up for his former rival’s record.

Giuliani explained that when he was criticizing Romney’s economic record, he was only doing it in contrast with his own “far superior” record in New York. But Giuliani made sure to clarify that Romney’s business experience gives him the edge this time around against President Obama. He touted the work he did with Romney on the 2002 Winter Olypmics, and contrasted Romney’s previous experience with Obama’s.

“This is man unlike President Obama, who had virtually no success before he– just a community organizer, state senate, never really had a payroll to meet or any responsibilities.”

The “community organizer” line is one not unfamiliar to Giuliani, as he used it rather dismissively during his speech at the 2008 Republican National Convention.