Rudy Giuliani On Violence In Gaza: ‘Without A Doubt A Proxy War’ By Iran 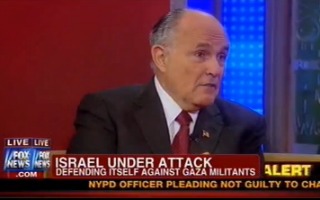 Former New York City mayor Rudy Giuliani stopped by Fox & Friends‘ curvy coach Tuesday morning, where he weighed in on the mounting violence in Gaza as well as the intel surrounding the attack on Benghazi.

“This seems to me, this is without doubt a proxy war,” he told the show’s hosts. “This is Iran getting the Palestinians to try to push the envelope as much as possible. It’s Israel trying to prepare itself for if they have to take action against Iran.”

There are three options right now for Iran, he continued. “Option number one is negotiate and do some kind of détente like we did with the Soviets. Number two, is military attacks. Both of those are pretty bad. The third is, let’s see if you can get a different regime. After all, we have a different regime in Egypt. we have a new one in Libya. We’re going to have a new one in Syria. A lot of questions about what’s going to replace them. In Iran, you probably could replace them with a pretty solid pro-Western government if you did the right things.”

As for Susan Rice, Giuliani maintains that it was “obvious from the beginning” that what happened in Benghazi constituted an act of terror. If you buy the story otherwise, he said, you’re either “incompetent” or simply playing politics. Do we really want a Secretary of State, he asked, who would buy the line that it was anything but terror?