Rudy Giuliani: President Obama Has Been A ‘Weakling’ In Dealing With Iran
VIDEO

Rudy Giuliani: President Obama Has Been A ‘Weakling’ In Dealing With Iran 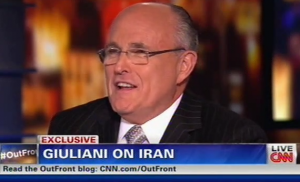 Former New York City Mayor Rudy Giuliani was a guest on Erin Burnett‘s OutFront Thursday night, and hit on a number of issues, from President Obama‘s supposed foreign policy failures to Giuliani’s endorsement of Rick Santorum when he ran for Senate. But his strongest comments came when the topic of Iran came up; specifically, the President’s handling of the country.

“As we ratchet up the pressure on them,” Giuliani said, “they may very well take that step to try to see what kind of pressure they can put on us, and we’re just going to have to be ready for it.” Giuliani added that there should be a fear of a nuclear-capable Iran, because it would place a serious weapon in the hands of, “irrational, crazy people.”

RELATED: John Bolton Doesn’t Think It’s In The United States’ ‘Interest To Stay Out’ Of An Israel-Iran War

Burnett later compared the Iran situation to that of Iraq — at least in the forum of public opinion — positing that, “people are saying, ‘Well they have this, they want to do this,’ and we did, we went in last time on that…and a lot of Americans think it was a huge mistake.”

Giuliani then suggested that maybe President Obama is, “a President without a strategy,” and said the he eventually has to take a tougher stance to stem the threat:

“We need a President who can say the words ‘bomb them’ and actually can do it if he has to in order to protect us from Iran becoming a nuclear power and most importantly, they have to believe that our President will do that to them. All of a sudden, that will change. We are the largest military in the entire world, they are a small, tiny little military power compared to us.”

The interview later moved to the topic of the current GOP field, and Giuliani said that he would not be endorsing anyone for a while. “I’m in a state of confusion about who to endorse,” he admitted. He said that the party’s fractured stances on social issues like abortion, gay marriage, and gun rights has left it in a precarious spot.

“It makes the party look like it isn’t a modern party,” Giuliani told Burnett. “It doesn’t understand the modern world that we live in.”

Watch Burnett’s interview with Giuliani below, courtesy of CNN: