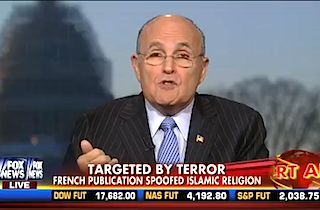 When President Barack Obama made his initial comments about the shooting at French satirical magazine Charlie Hebdo’s offices Wednesday morning, the three suspects had not yet been identified. The president referred to the event as a “terrorist” attack but did not use the word “Islamic.” To former New York City Mayor Rudy Giuliani, this omission was a “terrible mistake” and a “sign of weakness.”

Fox & Friends neglected to even include the “terrorist” line in its excerpt of Obama’s remarks, instead highlighting his use of the words “senseless violence,” before inviting Giuliani on to give his reaction.

“This would be as if Ronald Reagan wouldn’t have used the word Communism or John Kennedy wouldn’t have used the word Communism and described them as a ‘senseless enemy,'” Giuliani said. “This is not a senseless enemy, this is an enemy with sense. They have an ideology, they have a philosophy. You can call it a distortion of a religion, which it is, but it’s still an ideology that they follow.”

“I think it’s a terrible mistake,” he continued. “First of all, it’s a sign of weakness and secondly, it doesn’t organize the world against them and start to isolate the more moderate Muslims and give them a place to comment and speak out.” Referring to the 2009 attack at Fort Hood, Giuliani added, “Lucky he didn’t call it workplace violence, right?”

“When you understand your enemy, you can pursue them better,” Giuliani concluded. “When you don’t, then you make a lot of the terrible mistakes that you’ve seen this administration make over the last four or five years.”

And watch Obama’s full remarks below, via ABC News: