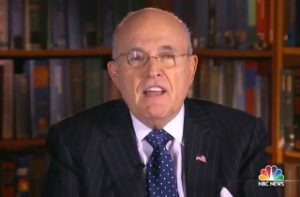 In the midst of the biggest crisis his campaign has dealt with so far, it appears that Donald Trump is leaning on his most trusted confidants to deliver his campaign’s message ahead of Sunday’s big debate.

According to the Boston Globe’s Matt Viser, Trump’s team wanted a campaign person to show up on the program.

Reince will not Face the Nation tomorrow. CBS says Trump campaign “wanted a campaign person” to appear instead. So Rudy Giuliani it will be.

But this wasn’t to be the only replacement duty for Rudy. We also learned that Trump campaign manager Kellyanne Conway was no longer set to appear on Fox News Sunday.

The New Yorker’s Ryan Lizza, who had just written up a profile piece on Conway, actually checked in with the veteran pollster to see if she had resigned.

Kellyanne Conway tells me she is NOT resigning. "That is silly," she texts. (There was speculation after she canceled tv appearance on Fox.)

Meanwhile, the list of Republicans distancing themselves from Trump in the wake of his “grab ’em by the pussy” comments continues to grow and grow.