Rupert Murdoch Had a Futuristic Meeting with Will.i.am

Rupert Murdoch Had a Futuristic Meeting with Will.i.am 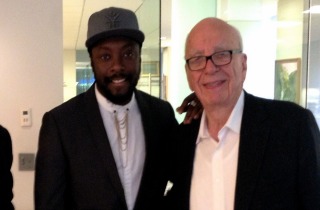 Will.I.Am, who made an appearance on NBC’s Meet the Press earlier this year that we’re still puzzling over, replied, “Yesterday and today I met with Rupert Murdoch to share my vision of the future…I believe he liked it…”

It is, however, not the first get together between Murdoch and Mr. I.Am. Back in September, a photo of the two together was posted to Murdoch’s Tumblr blog.

“A pretty awesome way to end the day,” read the caption on the post. “With Will.i.am, who came to talk about bringing education and job opportunities to kids in underserved communities. A really nice guy with a passion for change.”

UPDATE — 2:52 p.m. ET: A spokesperson told Mediaite that it is company policy not to comment on Murdoch’s tweets but that Murdoch has met with Will.I.Am “a few times” and that Murdoch thinks he’s “a very interesting guy.”