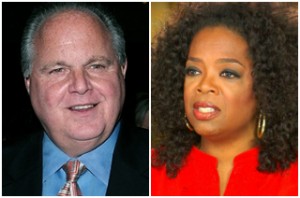 On his radio show Friday, Rush Limbaugh weighed in on Oprah Winfrey’s recent brush with discrimination, wondering if maybe the clerk who turned away one of the richest women in the world was not being “racist” but instead just thought the media mogul was too “fat” to be shopping in her store.

Much as President Obama recently revealed how he has experienced racism in the form of women “clutching their purses” when he stepped into an elevator, Winfrey this week told Entertainment Tonight a story about how she believes she was discriminated against in a Switzerland shop. She said a clerk refused to show her a handbag because, suggesting Winfrey would “not be able to afford” the $38,000 price tag. “I said, ‘OK, thank you so much, you’re probably right, I can’t afford it’ and walked out of the store. Now why did she do that?” Winfrey wondered.

After retelling the story to his radio listeners, Limbaugh said she’s looking at it all wrong. “If I were Oprah, I’d be so happy I could go someplace and not be recognized,” he said, adding, “we’ve all been insulted by retail people.” Limbaugh found it hard to believe that race played any factor in the incident, saying, “Maybe it’s because The Oprah’s fat!”

“Maybe the judgement that The Oprah couldn’t afford a $38,000 bag had nothing to do with her race, because aren’t the Swiss enlightened in that regard?” Limbaugh asked. “There isn’t any racism in Europe, right?”

Continuing down the path regarding Winfrey’s weight, Limbaugh asked, “Don’t most people think that the fat and the obese are poor and stupid? Where do you see fat people? You see them at places where things don’t cost very much.”