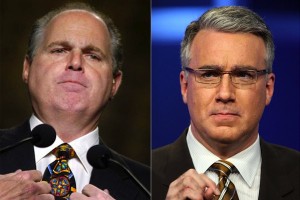 The big news of the morning has been Keith Olbermann’s new job at Current TV meaning the big news of the rest of the day will be everyone’s reactions to it. Jumping into the fray is Rush Limbaugh who discussed the announcement on his radio show this morning. He suggested that, “in normal circumstances,” Olbermann would have publicists hide this move, hoping that “nobody ever heard about it” implying just how much the talk radio giant thinks of Al Gore’s television network. But, since that’s not going to happen, Limbaugh suggested that everyone else should stop talking about it instead.

“I just have one piece of advice for the people at Fox; do not ever talk about what goes on over there and nobody will ever hear about it. Olbermann wouldn’t be anything today if they hadn’t decided to start picking fights with people over there. That network wouldn’t have half the audience its got as it does now.”

In his typical blowhardian way, Limbaugh does have a point. All of the talk of Olbermann’s move is the most that many people have ever probably heard of Current TV. Still, Olbermann’s troubles recently with MSNBC have only proven just how devoted his fan base is which means chances are good that they won’t need reminders from Bill O’Reilly to watch his stuff.

Still, it will be interesting to see if Limbaugh takes his own advice. Our guess is that the second Olbermann returns in front of television cameras, Limbaugh will be one of the first to register a (lets go out on a limb and say “negative”) review.

Check out the audio from Limbaugh’s show below: