Rush Limbaugh: I’m Not a ‘Fringe Kook,’ Obama Is
AUDIO

Rush Limbaugh: I’m Not a ‘Fringe Kook,’ Obama Is 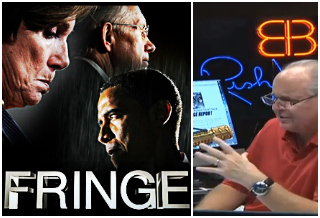 Rush Limbaugh is tired of being called a “fringe kook.” On his radio show Thursday, the hosts argued that he and his fellow conservatives aren’t the radicals in America, but rather that the label is better suited to Democrats. “We’re not the fringe kooks,” he said. “They are.”

“I’m really ticked off about this idea that you and me and so forth are kook fringe people, as though the Democrat Party and Barack Obama represent the center,” Limbaugh told his listeners. “What is the center of American politics? Obamacare?” He said the real center in this country is made up of the “vast majority of the American people don’t want” the health care law. This led to a series of rhetoric questions about what it means to be in the political “center” in America today.

“Are the people who want massive government running everything the center in politics today? BS. Is the center in American politics in favor of policies that bounce off this idea, this hoax of manmade global warming?

Limbaugh then listed off people who he believes to be “fringe kooks,” including President Obama, HHS Secretary Kathleen Sebelius, Senate Majority Leader Harry Reid (D-NV) and the “media who idolize these people.” He went so far to as suggest that environmental protesters like the ones who heckled the president on Wednesday are staged to “make Obama look like a centrist.”

Limbaugh’s frustration echoed comments he made earlier in the week about fellow conservatives Charles Krauthammer and George Will, who said they initially wondered whether President Obama might be a “centrist.” The idea that anyone could think that of the president caused Limbaugh to question who’s really on his conservative “team.”