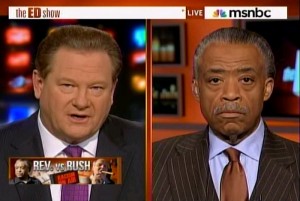 The gloves are coming off between two heavy hitters and the result could get ugly.  Al Sharpton launched the opening shot by announcing plans to meet with the FCC to get Rush Limbaugh and his allegedly racist comments regulated.  Sharpton returned to MSNBC’s Ed Show to talk about his next steps, which include circulating a petition amongst members of Congress and publicizing who is and who is not in favor of curbing racist comments on federally regulated airwaves.

A little over two years ago, the tone between the two larger-than-life personalities seemed somewhat respectful as Sharpton said in a New York Times Magazine profile of Limbaugh:

Rush is a lot smarter and craftier than Don Imus. Limbaugh puts things in a way that he can’t be blamed for easy bigotry. Some of the songs he does about me just make me laugh. But he’s the most dangerous guy we have to deal with on the right, including O’Reilly and Imus. They come at you with an ax. He uses a razor.

However, it seems that relationship has changed and now Sharpton is fighting back with his own random metaphorical weapon (blowdryer maybe?).  What probably motivated Sharpton was Rush’s consistent harsh criticism of President Obama, but what is likely lost on Sharpton (or purposefully ignored), is that Rush’s insults of Obama have nothing to do with the fact that he is black, and everything to do with the fact that he is a liberal, and in Rush’s view, fabulously unsuccessful President.  Rush himself hints at this in the clip Ed Schultz plays, where Rush humorously concludes all liberals must be racist because they are now criticizing Obama on the tax compromise, and since in the past any conservative criticism of Obama was always dismissed as racist.

Both Schultz and Sharpton apparently do not find Rush funny and Sharpton declares that although Rush has the right to be absurd, he does not have the right to be racist.  All of this is somewhat surprising coming from Sharpton who usually embraces debate as a frequent guest on conservative talk shows, but apparently is now eager to run to the principal’s office and have the FCC or Congress do the fighting on his behalf.  Sharpton concludes:

You’re going to tell me it’s alright to get up and by any way you want, explicit or implicit, just offend people based on their race or their gender or their sex?  I think that we’ve got to have a standard across the board in government how we use these airwaves and I’m determined to make sure we have that standard.

Watch the clip from MSNBC’s The Ed Show below: