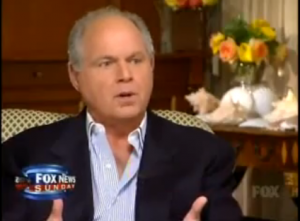 This morning, Rush Limbaugh appeared on Fox News Sunday with Chris Wallace. Limbaugh told Wallace, “I love Fox viewers, I love ’em,” early in the interview and proceeded to articulately and provocatively answer his questions. The pair covered a wide range of issues in over 25 minutes of airtime: Obama’s trip to Dover Air Force Base, health care, the 2010 election, Glenn Beck and the state of conservative media, his $400 million contract, his bid to on the St. Louis Rams and Sarah Palin.

Rush Limbaugh, in his own words:

On President Obama’s trip to Dover Air Force Base:“It was a photo-op. It was a photo-op precisely because he’s having big time trouble with this whole Afghanistan dithering situation. He found one family that would allow photos to be taken none of the others did. And of course whenever you have a sycophantic media following you around, able to promote an antfly then he can create the impression that he has all this concern…”

On Health Care: “This is not about insuring the uninsured, this is not about health care. this is about stealing one sixth of the US private sector and putting it under the control of federal government. And when they get this health care bill if they do, that’s the easiest, fastest way for them to be able to regulate every aspect of human behavior … it’s going to be the biggest snatch of freedom and liberty that has yet occurred in this country…”

On Glenn Beck: “I’m kind of proud. My radio audience is astronomically high. In 1988 there was nobody doing what I am doing, nobody … and now look what’s out: all of this conservative media — conservative talk radio, television, Fox News, the conservative blogosphere — in one way, if i wanted to have my ego be as big as Obama’s I could say ‘look what I created…'”

On his 8-year, $400 Million Radio Contract: “The $400 million is not guaranteed — I have to earn that. I’m ahead of schedule … value is determined by what somebody will pay you to do what you do. I’m probably worth more…”

On the Reaction to his Attempt to Buy a Minority Stake in the St. Louis Rams: “I don’t really take this personally, but I think it was a bunch of cowards all around.”

Do you think Sarah Palin is ready to be president?: “Yes I do. One thing I do not do is follow conventional wisdom … this is not an endorsement, but I do have profound respect for Sarah Palin. There’s not many politicians that have been through what she’s been put through. This woman, I think, is pretty tough.”