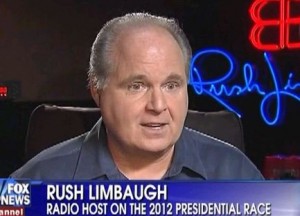 In an exclusive interview with Fox News’s Greta Van Susteren, Rush Limbaugh slammed the Republican establishment for thinking a “conservative nominee is route to defeat” and lamented the top-tier GOP candidates were “milquetoast moderates.” Despite these reservations, he said, “I think right now anybody other than Ron Paul could beat Obama if the election were tomorrow.”

RELATED: Rush Limbaugh: ‘Ron Paul Has Nothing To Do With The Tea Party’

“Republican primary voters are conservative, I don’t buy this whole notion that the Republicans can’t be confrontational, can’t be aggressive and can’t go on offense because they will tick off the independents,” Limbaugh opined.

“We’re not supposed to be critical of liberalism and socialism. It makes independents nervous. So what do we do? We nominate milqueoast moderates. And what do they do? They lose!” he added.

“I actually think that if you can get — if you talk to these guys — Republican establishment, elected officials, party officials, certain inside the beltway media, you just ask me can Obama be beat? I say hell yes!” Limbaugh exclaimed. “They will tell you ‘they don’t think so.’ They are scared to death! Nobody won anything defending anything. You win on offense, you win attacking, you don’t win defending anything because you can’t advance. They are always defending. You can’t advance! … I would rather have somebody who thinks Obama can be beat, knows Obama can be beat and wants Obama to be beat. And that is somebody conservative, not moderate, not squeamish, not populist. We don’t need a candidate who’s going to try to say things or be things he or she doesn’t believe or isn’t. I think conservative appeals to everybody.”

Watch Limbaugh’s take on the Republican establishment below via Fox News: