Rush Limbaugh: The Left Must Think Colbert Is a ‘Hateful Bigot’
AUDIO

Rush Limbaugh: The Left Must Think Colbert Is a ‘Hateful Bigot’ 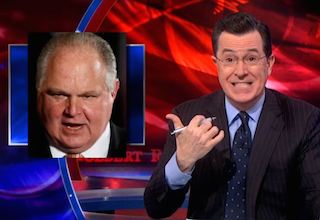 First, Rush Limbaugh decided that CBS had “declared war on the heartland of America” by hiring Stephen Colbert to replace David Letterman on The Late Show. Then, he doubled down, saying the network has effectively “chosen to write off a portion of the country” with the decision. And now? Limbaugh is wondering why liberals are not just as mad at CBS as he is.

On his radio show Tuesday, Limbaugh highlighted the fact that Colbert is a “devout Catholic.” As the soon-to-be Late Show host has revealed in his few out-of-character interviews, he even teaches Sunday school to his three children (or five if you took Limbaugh’s inflated figure as fact).

But like House Minority Leader Nancy Pelosi (D-CA) and Sen. Dick Durbin (D-IL), who also identify as Catholic, Limbaugh doesn’t think Colbert’s Catholicism says anything about his character or convictions. “All these leftists, they fall back on their devout Catholicism, but it doesn’t mean anything,” he said. “They use it as cover. They use it as symbolic, symbolism cover.”

“If Colbert’s a devout Catholic and has five kids, I suppose that he must believe in traditional marriage, right?” Limbaugh assumed. “And if he does, then he’s a hateful bigot, according to the current definitions of the left.”

Despite these conflicting assessments of Colbert than man, Limbaugh maintained that he was a “political hire” by CBS, adding, “there’s no question in my mind that it is.”