Russell Brand Fires Back at Greg Gutfeld: He ‘Vibrates in Hatred’ 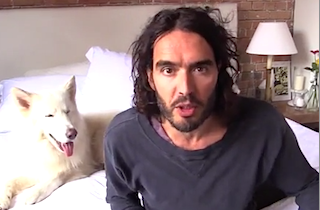 A Fox News host talked about Russell Brand this week, which means Russell Brand is once again talking about Fox News on his YouTube show “The Trews.” This time, it was The Five’s Greg Gutfeld, who called the comedian “left-wing Commie scum” for his comments about Wall Street Journal editor Jason Riley’s take on Ferguson. “Today we’ll be looking at some Fox News footage, and I’ll be defending myself, as usual!” Brand declared.

Brand did a little research on Gutfeld (“Did a man ever live up to his name?”) and discovered that he wrote a book titled The Joy of Hate

RELATED: Russell Brand to Hannity: Speak from Love, ‘Not from Vengeance and Hatred’

And watch the full Gutfeld clip below, via Fox News: