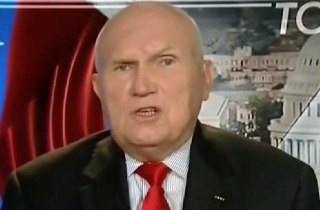 Russia’s Investigative Committee is looking into comments made by Fox News military analyst and former U.S. Army Major General Robert Scales about the U.S. possibly needing to “kill Russians” to send a message. Earlier this week, Scales appeared on Fox Business Network to discuss Ukraine with Lou Dobbs. Dobbs asked him about the effect of U.S. troops being deployed to Ukraine.

Scales said, “The only way the United States can have any effect in this region and turn the tide is to start killing Russians… killing so many Russians that even Putin’s media can’t hide the fact that Russians are returning to the motherland in body bags.”

Well, multiple news outlets have reported this week that Russia’s Investigative Committee is pursuing a criminal case against Scales, calling his comments “break not only the norms of the Russian legislation but Article 20 of the International Covenant on Civil and Political Rights of 1966, which prohibits any war propaganda and any instigation of discrimination, enmity or violence.”

Scales responded on Fox News tonight on Greta Van Susteren‘s show. He said this just proves that Vladimir Putin‘s Russia is in the business of intimidating media outlets that are “trying to tell the truth about what’s going on.”

He joked to Van Susteren that any future plans to vacation in Russia are now on hold.

And you can check out his response tonight here, via Fox News: