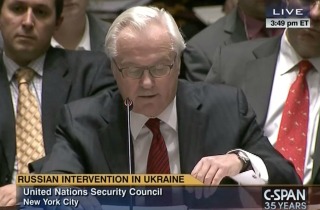 On Wednesday, an emergency meeting of the United Nations Security Council convened to address Russia’s invasion and annexation of the Ukrainian peninsula of Crimea. Russian ambassador Vitaly Churkin told the delegates that the Russian Federation was confused by the European Union and the West seeming to prefer allying with “racist” elements of the newly installed Ukrainian government.

Churkin told the delegates that Crimea is indisputably a Russian territory and that fact has now been codified by a popular referendum.

“The pseudo-friends of Ukraine need to finally understand the cause of the crisis there lies not with Russia, but in the responsible actions of individual Ukrainian political forces and their foreign mentors,” he continued.

Churkin said that the West, which encouraged an “artificial choice” in Ukraine between Moscow and Brussels, “provoked” the crisis which toppled the government in Kiev and resulted in a Russian intervention in Crimea.

“However, Western capitals, it would seem, continue to feel no shame at this,” Churkin remarked. “Backing people who are not ready to listen or heed the views of the whole of the Ukrainian people, and who are fully dominated by ultra-radical and nationalist organizations of the Right Sector and the racist, anti-Semitic, and xenophobe, according to the European Union’s parliament, Freedom Party.”

“And, yet, it is with them that the EU is planning to, in the near future, sign a political component on association,” he added.