S.E. Cupp Agitated With Her Co-Hosts After They Mock And Dismiss Romney’s Release Of Tax Returns
video

S.E. Cupp Agitated With Her Co-Hosts After They Mock And Dismiss Romney’s Release Of Tax Returns 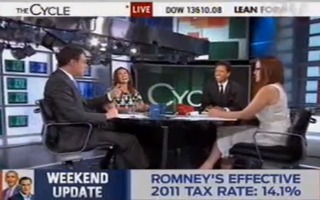 With Mitt Romney releasing his long-awaited 2011 tax returns accompanied by a summary of the last 20 years of tax filings S.E. Cupp became visibly frustrated with her fellow hosts of MSNBC’s The Cycle as they laughed off what they described as Romney’s clumsy attempt to change the subject from his statement about the 47 percent of people who pay no income tax.

“We ought to have a trademark made for only Mitt Romney moments,” said Steve Kornacki after noting that Romney announced his intention to release his 2011 returns and a summary of past returns on Friday. “We’ve had a few in this campaign and this is one of them.”

Kornacki pointed out that Romney violated his own criteria for being president by paying more than the minimum that is required. Kornacki laughed noting that Romney had previously said that paying more in taxes than is the legal obligation would disqualify him for the job.

“I’m sorry, it’s just comical if nothing else,” said Kornacki to the laughs of many of his fellow co-hosts.

“I think you’re better than this” said a straight-faced Cupp. “This is a man who was lambasted as a cheat and a liar, someone who was dishonest for months. Harry Reid said he paid no taxes. That’s shameful. He owes him an apology.”

“This is a man who gave 44 percent of his money away,” said Cupp. “You’re better than this.”

Kornacki said that it is fair to continue to criticize Romney for holding back tax returns because Democrats called for 10 years of returns.

“It’s irresponsible,” Cupp shot back. “He got his name right and he disqualified himself. Got it.”

“The claim is he didn’t pay for 10 years. We have two years now,” said Kornacki.

“He would have actually paid 9 percent if he didn’t artificially inseminate the number,” said Touré.

“He didn’t artificially do anything,” said Cupp.

“Yes he did – he paid more than he was supposed to,” Touré replied. He said that the Romney campaign released these returns today only to distract the press from continuing to press him on his comments about the 47 percent of people who pay no income taxes.

“So, when he doesn’t release it he’s a liar and he’s got something to hide, and when he does he’s out of ideas,” Cupp responded.

“I go back to the Bible,” Touré concluded. “The rich man giving a bunch means less than the poor person giving a penny.”