S.E. Cupp And Touré Battle Over Whether NRA Wants More Massacres, Mentally Ill To Have Access To Guns
video

S.E. Cupp And Touré Battle Over Whether NRA Wants More Massacres, Mentally Ill To Have Access To Guns 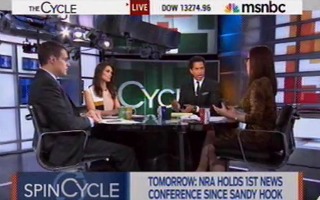 On Thursday’s The Cycle on MSNBC, cohosts S.E. Cupp and Touré clashed over his suggestion that the National Rifle Association benefits from horrific mass shootings. Touré claimed that the NRA, “in a perverse way,” welcome mass shootings like what occurred in Connecticut last week. Cupp called Touré’s comment a “terrible thing to say.”

“How do we expect them to really not want these moments,” Touré asked.

“That’s a terrible thing to say,” Cupp shot back. “The NRA would never want these kinds of moments, and the NRA invests million annually in gun safety.”