S.E. Cupp: ‘Ann Romney Is Lying, They Are Not Looking At Women’ To Be Romney’s Vice President 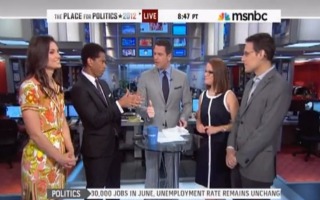 The four hosts of MSNBC’s The Cycle appeared with anchor Thomas Roberts on Friday where each host weighed in with their updated rankings for who they think will be Mitt Romney’s vice presidential pick. Co-host S.E. Cupp was asked who she thought the most likely female potential vice president would be given Ann Romney’s suggestion that the campaign was seriously considering a woman. “Ann Romney is lying,” said Cupp. “They are not looking at women. They are not going to pick a woman candidate. There is just no way.”

Roberts first asked co-host Krystal Ball for her vice presidential choice. Ball said that she thinks Romney needs to present himself as a “non-offensive alternative to the president.” In her estimation, that moves former Minnesota Gov. Tim Pawlenty to the top of the pack. She said that while Ohio Sen. Rob Portman is still a strong choice, “he carries a lot of baggage having been with the Bush administration and the budget.”

Touré said that while he things Portman is the most likely pick, he would have to presume Ayotte would have to be the strongest female contender if, as Ann Romney said, the campaign is considering a woman to be their vice presidential nominee. Touré said he believes that New Hampshire Sen. Kelly Ayotte could help “winnow the gender gap which his huge – which is going to be hugely problematic for Romney.”

Cupp said Ann Romney was lying when she said the campaign is vetting a woman as their potential vice president. Portman represents the pick most likely to “do no harm,” in Cupp’s estimation, but Pawlenty could also end up as the Romney camp’s choice because he is “actually pretty likable” on the stump.

Finally, co-host Steve Kornacki said he believes that there is such a thing as a “courtesy vet” as a way of saying thank you to key supporters who have no chance of joining the nominee on the presidential ticket. He warned that history has shown the names that are on all the pundit’s lips are often proven incorrect when the final vice presidential choice is announced.