S.E. Cupp Challenges David Plouffe on Obamacare Report: ‘This Spin on This Is Incredible’
VIDEO

S.E. Cupp Challenges David Plouffe on Obamacare Report: ‘This Spin on This Is Incredible’ 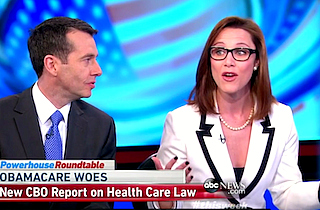 CNN contributor S.E. Cupp was not impressed with former White House senior advisor David Plouffe’s response to the Congressional Budget Office’s report this week on Obamacare’s influence on the labor market, which projected that new healthcare incentives would cause a reduction of hours equivalent to 2 million jobs.

“The spin on this is incredible,” Cupp said on This Week With George Stephanopoulos. “What has never been controversial in the past is that disincentivizing work is bad, economically and culturally and socially. Economists have made it their project for the past century to develop welfare programs that disincentivize work the least, because disincentivizing work has been a bad idea. Now for Democrats it’s suddenly ‘freedom.’ I think the American public sees through that. It’s a pretty transparent effort.”

RELATED: Pretty Much Everybody Messed Up the CBO’s Report on Obamacare

“If you’re running for office,” Plouffe advised. “You say, ‘Here’s what the CBO report said: it would reduce the deficit, it’s gonna reduce unemployment, it helps the economy, and it gives workers more flexibility.’ It’s not that complicated.”

ABC News political correspondent Jeff Zeleny thought it might be. “I went up to a few Democrats who were running, in trouble, Mary Landrieu (D-LA), possibly, Senator Jeanne Shaheen (D-NH) from New Hampshire. The look on their face when you ask them about the CBO report, is a look that just validates the fears out there.”