S.E. Cupp Falsely Claims That None Of Biden Gun Task Force Measures Would ‘Prevent Another Newtown’ 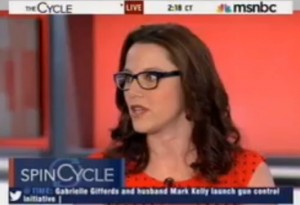 On Tuesday afternoon’s The Cycle, conservative co-host S.E. Cupp threw a blazing fastball past her fellow Cyclers when she claimed that none of the measures reportedly under consideration by Vice President Joe Biden‘s task force on gun violence would be sufficient to “prevent another Newtown.”

S.E. whipped another one past her fellows when she described doing nothing, or adopting the Biden measures, as a “false choice,” adding that “there are conversations to have about mental health,” which has been a successful formula for Dr. Phil, but not for reducing gun violence.

The issue of gun regulation had faded from the media’s view somewhat, but was back in the news today, thanks to former Rep. Gabby Giffords‘ new effort to combat the gun lobby, on the second anniversary of the tragic mass shooting in Tucson. On Tuesday’s The Cycle, the gang discussed the chances of effective policy emerging from the aftermath of the Sandy Hook Elementary School shooting.

S.E. Cupp was ready with some familiar arguments: that gun regulations shouldn’t be considered in the wake of mass tragedies, and that such regulations can’t effectively prevent gun violence. “The problem with all quick response gun legislation that happens after some kind of event,” she said, “is that it has to accomplish two things simultaneously: It has to solve a problem, and it has to uphold and maintain the rights of law-abiding gun owners. It rarely does one of those, let alone both, of those.”

S.E. went on to say, “I hate to break it to you, but none of the proposals coming out of the task force so far prevent another Newtown.”

S.E. called that a “false choice,” and added that she’s not for the status quo. “There are conversations to have about mental health,” she said, “but this is tilting at windmills.”

Let me preface this by saying that S.E. Cupp is a great person, who is obviously motivated by long-held convictions, and who undoubtedly believes everything she is saying, but her statements are an unfortunate mirror of the gun lobby’s most insidious, and demonstrably false, talking points. The NRA uses good people to make their toxic myths sound reasonable, and it works. Three liberals who know better failed to knock them down, even though they are similarly motivated by deeply-held convictions, maybe because there were so many packed into a small space. Here they are, in order:

1. We shouldn’t do “Quick response gun legislation” – That notion, that now is not the right time to enact gun regulations, is the gun lobby’s secret, most effective weapon, and is already being deployed by Senate Minority Leader Mitch McConnell (R-KY). The longer this process drags on, the more (they hope) the public’s political energy around the topic will dissipate. I’m not sure what “quick response” gun laws even exist, unless the Brady Bill counts. That only took 12 years to get passed.

2. “Quick response gun legislation” doesn’t solve problems, and doesn’t protect law-abiding gun owners – The National Firearms Act was originally enacted as a response to Prohibition-era gangsters, and was used to effectively ban machine guns, among other things. The Supreme Court gutted the law in 1968, not because it infringed on the 2nd Amendment rights of law-abiding gun owners, but because it infringed on the 5th Amendment right of felons. The law was rewritten in 1968, and has been very effective at preventing machine gun crime, which is exceedingly rare.

Giving the gun lobby time to water down gun laws, however, does result in supposedly “strict” regulations that are ineffective, and easy to circumvent.

3. The proposals coming out of the Biden task force so far would not prevent another Newtown – Well, here are those proposals, as reported by The Washington Post:

Sen. Feinstein’s proposed assault weapons ban would have covered all of the weapons and clips used in the Newtown shooting, and would have required them to be registered under the National Firearms Act if they were owned before the ban took effect. Nancy Lanza would not have been able to purchase these weapons under such a ban, and there’s no reason to believe she would have chosen to keep banned weapons in her home, or would have met the NFA registration requirements, had she already purchased them. Like machine guns now, these weapons would become extremely rare, as would their use in crimes like mass shootings.

The Biden group’s proposals could also prevent other types of gun violence, if they’re not watered down by time and political cowardice, but where Newtown is concerned, the “stronger mental health checks” could easily have prevented the purchase of those, or any, weapons.

4. The solution is “conversations about mental health” – S.E. refuted this one herself when she said that nothing in the Biden plan would prevent another Newtown, since WaPo‘s reporting on the task force literally includes “significant discussion of mental-health issues.” It’s an attractive notion, and I agree that even though mass shooters are a needle in a haystack, we should still try to find them. It makes no sense, however, not to pull the piles of assault weapons out of the haystack, as well. That’s a false choice.

5. Effective gu regulation is “tilting at windmills” – This one might actually be true, but only if the American people, the media, and our leaders all fail miserably. If history is any guide, it doesn’t look good, but I believe things will be different this time. I have to believe that. It would be much easier with the help of smart, persuasive people like S.E. Cupp.