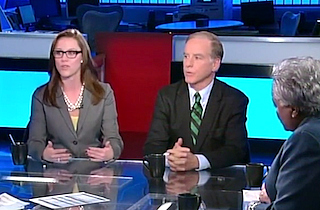 On This Week With George Stephanopoulos Sunday morning, panelists S.E. Cupp and Howard Dean sparred over the theme of the morning, namely whether the Affordable Care Act can work if young people don’t sign up for it, in which case the federal exchange website’s problems could be extremely damaging to the functioning of the law.

“Obamacare relies on Millennials, these young invincibles, who have never bought health insurance in the past, to suddenly change their behavior and buy something they don’t think they need,” Cupp said. “But culturally, it reads as an inability to read their language…Millennials don’t meet in person with insurance brokers or travel agents, or anyone…They’re not going to be patient as the administration tweaks all of these glitches.”

“It is not true that if young people don’t sign up that the program doesn’t work,” Dean said. “The reason that is framed as being true is everybody assumes that you can’t do community rating without an individual mandate, and that’s not true, and I know because I did twenty years ago. We did most of the stuff that’s in Obamacare in Vermont…The problem is scale. It probably would have been better to have four or five regional exchanges rather than one big federal one. They didn’t know thirty-six states would refuse to participate in the regional exchanges.”

“We can fault the Obama administration,” Dean said. “I should add that the Republicans bear some responsibility for this. They actually did defund part of Obamacare. The forty-four votes that took to kill it didn’t do anything, but there was some stuff attached to riders. Everything the Obama administration had to do has had to go upstream against Republicans who wanted to kill this bill no matter what.”