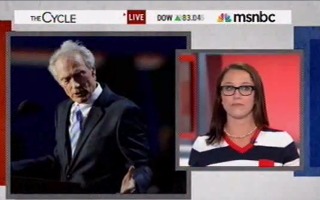 Having returned from a week of covering the Republican National Convention, S.E. Cupp was immediately asked by her fellow hosts of MSNBC’s The Cycle to weigh in with her thoughts on how Clint Eastwood handled his Thursday night speech. Cupp said she thought the speech derailed the RNC’s programming, distracted from both Sen. Marco Rubio (R-FL) and Mitt Romney and made her want to ingest cyanide.

“This derailed the entire theme that was building up of the night – all of the momentum was gone,” said Cupp of Eastwood’s RNC address. “I don’t remember what Marco Rubio said because I was still trying to figure out what the hell just happened when Clint Eastwood took the stage.”

“I didn’t think that having an old, white guy on the stage was another thing we needed frankly,” Cupp said. “This is what conservatives do – they get, sort of, distracted by the shiny new toy in any Hollywood celebrity that comes our way.”

She continued, saying she was opposed to the idea to have Eastwood address the RNC from the beginning. She said she thought it would be hypocritical to embrace a conservative celebrity, given that Republicans are often dismissive of celebrities who are vocally liberal.

“A fist full of dollars? I wanted a fist full of cyanide by the end of that,” Cupp concluded, to the laughs of her co-hosts.