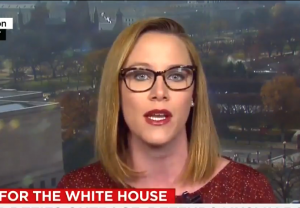 During a panel discussion of Donald Trump‘s call for banning all Muslim immigrants in the United States, conservative commentator S.E. Cupp told CNN anchor John Berman that the Republican presidential candidate will never become President of the United States.

“Frankly, I don’t know how Trump surrogates like [Lou Gargiulo] can sleep at night peddling this unconstitutional, un-conservative and un-American garbage for a guy who — let’s face it — will never be president.

Gargiulo, a businessman and Trump campaign supporter in New Hampshire, tried to get a word in at this point, but Berman refused — especially since he’d already interrupted Ahmadiyya Muslim Community USA spokesperson Harris Zafar earlier in the segment.

Meanwhile, Cupp went on to claim that almost every card-carrying GOP member (sans Ted Cruz) had “summarily denounced” Trump’s proposed ban. She also insisted that Trump wouldn’t become president because he would never get the party’s nomination.

Berman then asked if GOP chairman Reince Priebus‘s pledge idea was a “bad idea,” and Cupp agreed. Trump signed the pledge, despite claiming that he would consider a third-party run, and Priebus has since maintained that the candidate would never abandon the GOP.