S.E. Cupp: MSNBC Has a Problem That’s ‘Spiraling Out of Control’
VIDEO

S.E. Cupp: MSNBC Has a Problem That’s ‘Spiraling Out of Control’ 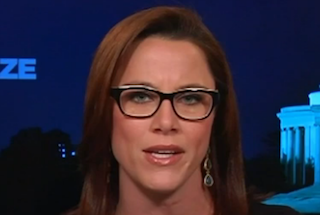 Conservative commentator S.E. Cupp lashed out at her former employer, MSNBC, during an interview with TheBlaze Friday, where she currently serves as a contributor in addition to her role has host of CNN’s Crossfire. After the official MSNBC Twitter account sent out a now-deleted tweet claiming that “right-wing with hate” a new Cheerios commercial featuring a bi-racial couple, Cupp said she’s “deeply disappointed” with the network.

Cupp said this incident has proven that liberals are “absolutely fixated” on bi-racial marriage to the point where it’s “all they can see, even when they watch an adorable Cheerios commercial.” It was apparently also all some racist YouTube commenters could see when Cheerios debuted their first ad in this series last May.

The pundit recalled her time on MSNBC, when she served as one of the four co-hosts on The Cycle, a show where she said “race came up a lot.” She said, “I always welcomed that idea where someone, some less thoughtful pundit, would introduce that idea that half the country is racist because they’re Republican, because I thought, ‘This is great. If liberalism exposes tolerance, I’m glad we are showing and exposing that lack of tolerance for what it is.'”

“I’m sure Phil Griffin believes that’s a real problem,” Cupp continued, noting that the MSNBC president apologized and fired the person responsible for the tweet. “But with Melissa Harris-Perry and Martin Bashir and Alec Baldwin, and the list goes on and on, this is a problem that’s spiraling out of control.”