S.E. Cupp Rails Against Obama’s Vision Of America: ‘You Own Nothing, Not Even Your Own Success’
video

S.E. Cupp Rails Against Obama’s Vision Of America: ‘You Own Nothing, Not Even Your Own Success’ 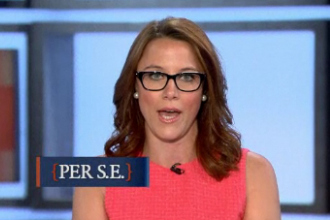 On Tuesday’s edition of MSNBC’s The Cycle, co-host S.E. Cupp went on the attack against President Barack Obama, lambasting his recent comments on how successful business is only made possible by government investment in public infrastructure. The outspoken conservative dubbed the president’s remarks part of “Obama’s Collectivist States of America” and declared the American dream “merely an illusion.”

“According to President Obama, you don’t get anywhere through your own hard work or ingenuity,” Cupp began. “Every success you have is thanks to the collaborative work of thousands from the people who collect your taxes to the people who pave your roads. Well, of course that’s true in that most folks have a kind friend, a nurturing relative, a wise mentor or, well, a paved road to drive. We’re all products of an American community that helps each other out from time to time. But that generosity of spirit is the very reason the president thinks we should abandon the notion of the American dream and individual success in favor of collectivism, that incredibly inspiring belief that success is shared and the state alone can make all your dreams come true.”

Speaking to supporters last week in Virginia, the president said that “if you are successful, somebody along the line gave you some help. There was a great teacher somewhere in your life. Somebody helped to create this unbelievable american system that we have that allowed you to thrive. Somebody invested in roads and bridges — if you’ve got a business, you didn’t build that. Somebody else made that happen.”

“That’s a frighteningly honest illumination of Obama’s worldview,” Cupp said, and then cited Objectivist philosopher Ayn Rand to say that collectivism shares a lot in common with racism in that “the individual has no rights, that his life and work belong to the group, to society, the tribe, the state, the nation, and that the group may sacrifice him at its own whim to its own interest.”

She continued on to explain where she sees collectivism in the president’s policies:

Obama’s directive last week to drop the federal work requirements from welfare reform is a further kick to the gut for those who believe, as Bill Clinton did, that we should work for what we earn; and that handouts are not the same as a hand up. Work has no value for Obama because, in a collective, the very few will support the many. … This actually puts into crystal-clear context Obama’s vision of collectivist America: you own nothing, not even your own success.

Co-host Steve Kornacki took issue with the monologue, asking Cupp if she can name “what actions Obama has actually taken or is actually proposing that would remotely fit the definition of collectivism, because [the president] is talking about raising the marginal rates to 36 and 39.6%. And the highest marginal rates on the wealthy in this country, when a Republican was president, Dwight Eisenhower in the 1950s, when people were very successful and individualism was still the rule and there were lots of rich industrialists and tycoons in this country, [the rate] was over 70%.

“So we’re at half the level that we were generations ago, and he’s talking about a very slight increase at a time where mobility, class mobility is declining, where inequality is surging. That’s what he’s proposing and you’re calling it ‘collectivism’?”

“Do you think he’d be doing that if he had a House that was controlled by Democrats instead of Republicans?” Cupp replied, implying that the president would increase marginal tax rates on the wealthy by even more if the Democrats had control of Congress.

“He had a House controlled by them and he extended the Bush tax cuts,” Kornacki responded. “Was Bill Clinton a collectivist?”

“He’s proposing the exact same rates that Clinton had,” Kornacki shot back.

“We’re not talking about the economic policies,” Cupp responded, as Kornacki interrupted that “collectivism is an economic policy,” which was met with Cupp firing back that “it’s also a political policy and this is political policy for the idea that what you do, what you earn, what you make belongs to everyone else and you should feel badly about making so much and paying so little, even though 20% of top income earners in this country pay for the 70% of our income.”