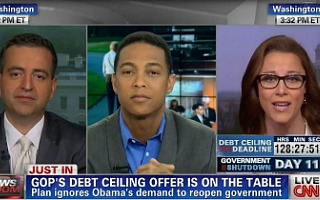 CNN host S.E. Cupp joined anchor Don Lemon on Friday for a panel discussion about Rep. Paul Ryan (R-WI) and his editorial in the Wall Street Journal where he proposed an alternative to ending the government shutdown that does not involve reforms to the Affordable Care Act. Cupp set out to accuse Sen. Ted Cruz’s (R-TX) defenders, who have accused Ryan of insufficient conservatism, of being “childish,” but she ended up battling both the CNN anchor and guest when she felt that she was being intentionally misinterpreted.

“I’ve never been sanguine about Ted Cruz’s strategy actually working, but I admire his stance,” Cupp began. “He’s doing what he was elected to do.”

“The divide in the Republican Party is not over policy,” she continued. “I don’t like the tactics where Senators like Ted Cruz or conservative groups get together and decide whose conservative enough and who isn’t.”

She said that Ryan’s op-ed was not “heretical” to conservatism and shouldn’t be viewed that way by the Republican Party grassroots. “And I think for Ted Cruz’s defenders to come out and swat him down as a RINO is really unproductive and, frankly, fairly childish,” Cupp added.

“You’re saying they were doing what they were elected to do,” Don Lemon clarified. “Shut down the government?”

“No,” Cupp clarified. “They made promises to constituents that they would do everything that they could to end it, repeal it, delay it, pick it apart, and that’s exactly what they’ve done.

Democratic strategist Chris Kofinis said that Republican infighting makes it harder for the public to see the GOP as a functioning, responsible party.

“Most people understood that President Obama would have absolutely no problem allowing the government to shut down because he know it would be bad for Republicans,” Cupp said.

The pair talked over each other when Lemon interrupted and said he would moderate the discussion.

Kofinis said it was inappropriate to think that Obama “would get some sort of joy” over the government being shut down.

“I didn’t say that,” Cupp interjected.

“You said it was part of his strategy,” Kofinis countered.

“I didn’t say that either,” she went on. “I am perfectly capable of explaining my point of view. I don’t need either of you to put words in my mouth.”

“I am not putting words in your mouth,” Lemon protested. “Don’t say that, S.E.”