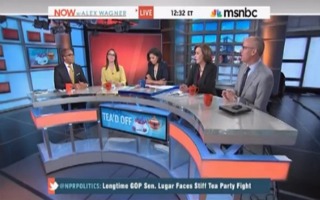 On Tuesday, Alex Wagner’s MSNBC panel tackled the heated Republican primary race between five-term Sen. Richard Lugar (R-IN) and Indiana State Treasurer Richard Murdoch. The panel seemed to view the intraparty Republican feud as a continuation of the GOP’s rightward-drift ever farther away from the center of the American electorate. New York Daily News Columnist S.E. Cupp, however, had the temerity to suggest that the Republican party was pushed in that direction by the opposition – an assertion that was met with apparent revulsion by her fellow left-leaning panelists.

RELATED: S.E. Cupp Offers Olbermann Epic Farewell On GBTV: ‘I Am Very Sorry Your TV Career Has Just Been Aborted’

“We talk a lot on this show about the decline in moderates – or the endangered species that is the moderate Republican,” Wagner opened the segment. “It is a really interesting case study in what is happening in the Republican party – not just old and new but moderate and extreme.”

Cupp immediately frustrated the panel by not spiking the easily set-up opportunity to bash the Republican party by suggesting that extremism is a two-way street. “But why doesn’t anyone bring up the splinter in the Democratic party when folks like [Sen.] Ben Nelson (D-NE), [Rep.] Heath Shuler (D-NC) and [Sen.] Blanche Lincoln (D-AR) leave,” said Cupp. “I think you’re right, that it’s hard to be a moderate these days, but it’s hard to be a moderate on both sides. I think both parties are pushing to the extremes a little bit. And I think it’s a little disingenuous to just suggest this is happening because of the tea party on the right when clearly it happens on the left as well.”

You could nearly hear her fellow panelists digging their fingernails into their respective desks and chomping at the opportunity to scoff at Cupp’s assertion.

Well, that is true. But Blanche Lincoln nearly was. Seeking her third term in the Senate, Lincoln faced a stiff challenge on her left from Arkansas Lieutenant Gov. Bill Halter – when neither candidate received a majority of the vote, they headed to a runoff election which Lincoln won by only 4 points. Rep. Shuler, for his part, led an unsuccessful effort to wrest control of his party in the House from minority leader Rep. Nancy Pelosi (D-CA) on day one of the new 112th Congress.

To suggest that these moderates faced anything but stiff opposition from the more liberal members of their own party is strikingly disingenuous. Cupp was not suggesting that the GOP has not moved to the right – they have, but only as a response to the Democratic party’s dramatic move to the left over the course of the 111th Congress.

It was legislators like Lincoln and Shuler who cautioned the members of their caucuses that the legislative initiatives of the 111th Congress were simply too liberal for the center-right nation they represented. But they went ignored. The Democrats passed the “stimulus” bill on a near party-line vote with seven Democratic defections in the House. The House passed the Affordable Care Act on a straight party line vote with 39 Democratic defections.

A Gallup poll from June, 2010 showed that a near majority, 49 percent, said the Democratic party was “too liberal.” At the same time, respondents said that the Republican party was “just right” over “too conservative” for the first time since before President Barack Obama’s 2008 election.

Sadly, many of those Democrats who defected and spoke out against their party’s excesses were not rewarded by the voters back home. Democrats suffered a crushing defeat in the 2010 midterms – the largest electoral rebuke of a governing party since 1938.

The 2010 elections whipped out Democratic representation in many suburban and exurban districts. Congressional Democrats now represent an increasingly conflictual coalition of wealthy suburban voters residing in the districts surrounding major cities and urban voters, many of whom occupy majority minority districts mandated into existence by Section 5 of the Voting Rights Act. (The Weekly Standard’s Jay Cost has a region-by-region breakdown of the scale and scope of the Democratic party’s losses in a four-part series that covers the South, Northeast, West, and Midwest).

The sweeping losses that the Democratic party took in the 2010 midterms took their biggest toll on centrist Democrats and “Blue Dogs,” a group nearing extinction, primarily because their districts were composed of moderate Republicans and Democrats who supported a legacy or centrist representative. The Democratic party, which had at least internal dissent in the 111th Congress, is today nearly bereft of centrist voices.

This is not to say that Republicans, as Cupp concedes, have remained steadfastly centrist. At the American Prospect, Jamelle Bouie writes in 2011 about the National Journal’s partisan vote rankings which showed that the new Congress’ Republican caucus is now more conservative than the Democratic caucus is liberal:

None of this occurred in a vacuum. The voters did not head to the polls and vote a historically large Republican majority into Congress on a whim. The American electorate responded to the perception that the governing party had shifted too far away from the center, and required a push from the electorate back in that direction.

It says quite a lot about the state of Democratic commentary that it is heretical to admit that the actions of the 111th Congress and the Democratic president fostered the present conservative iteration of the Republican party. By not admitting that fairly demonstrable fact, the liberal commentariat will not be able to learn from history and receive the catharsis that comes from such an admission of fault. Fortunately for the Democratic party, as a Republican budget resolution moves forward to markup the Senate Budget Committee, the party seems prepared to learn from their mistakes.

View the panel segment below via MSNBC: