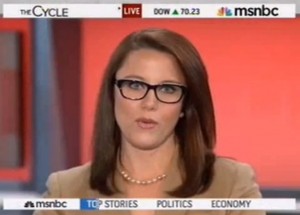 On Tueday afternoon’s The Cycle, co-host S.E. Cupp devoted her video essay “Per S.E.”segment to the issue of racial coding and “dogwhistles,” or rather, to apparently denying their existence. This issue has come up on the show before, and I’m sure she’s had many conversations about it with co-host Touré, but S.E. still thinks that “real” racism is “self-evident,”and that all accusations of racial code and dogwhistling are supported solely by “someone simply saying so.”

She also joins other conservatives in deriding “word policing” or “political correctness” as self-parody, ironically simply by saying it is:

S.E. is wrong about a great many things here, but I feel it’s important to say that I’ve always known her to be a good, honest person, and I’m sure she comes by her wrongness in good faith. For several decades, the conservative movement has dedicated a tremendous amount of energy toward ginning up resentment of what they derisively call “political correctness,” the idea that one should ever pay any attention to the potential of their own words to offend someone else. Within the conservative bubble, this effort has been so successful that most conservatives consider an accusation of racism to be worse than actual racism. As a product of that culture, S.E. seems to have internalized many of their tropes, with little or no personal experience to counter them.

It’s also important to note that, of course, not every accusation of racism and/or race-baiting is made in good faith. Conservatives will tell you that virtually none are, a somewhat racist conceit in and of itself. The truth lies somewhere between those extremes.

Having said that, respectfully and with affection, here are the things she’s wrong about, in order of importance.

“Real racism is self-evident. It doesn’t require coding or obfuscation or subliminal messaging, and it exists within both parties.”

This is a dangerous premise, and the conservative belief in it undermines their very ability to participate in the conversation (which, you’ll soon see, is the entire point). Unless you’re burning a cross while wearing a pillowcase and chanting the n-word, according to conservatives, there’s just no way to tell when someone’s being racist, or, as S.E. says, they confess, or unwittingly reveal their secret plot. She’s not just saying you can’t prove the racism, she’s saying it basically isn’t there, it’s indistinguishable from non-racist behavior, and those who divine it are either liars or big babies.

In order to proceed in a discussion of less-overt racism, you have to be able to admit it could possibly exist, but that’s the beauty of this conservative myth: mission accomplished. They don’t want to talk about it, they don’t want anyone to talk about it, while still enjoying the fruits of it. If good people like S.E. can be blinded to less overt racism, then attacks like Mitt Romney’s welfare reform lie become double-edged weapons that energize the racially resentful and those who resent charges of racism.

There are multitudes of ways to marginalize people based on their race without resorting to slurs and violence, some easier to detect than others, but all infinitely harder to detect when you’ve never experienced them. If you’ve never called a black man “son,”or experienced being called that as a grown man, that might seem like a tough call to make, but it really isn’t. You just have to know, and you have to care.

But “real racism”goes beyond the self-evident, and even beyond the less-evident-but-still-obvious-if-you’re-paying-attention. Nobody called any of the people in this 2009 study the n-word (or even “son”), burned crosses on their lawns, or threw peanuts at them, they just didn’t hire them if they had black-sounding names. Ask one of them if it’s better to occasionally swing wide in examining less overt racism, or to ignore it. “Real racism”is not self-evident. It’s insidious, and it destroys lives.

“The other problem is that it requires no homework, no fact-checking, no sources, no citations. All it requires is someone to say it’s so. The only way to know whether Mitt Romney is using welfare reform to prick up racist white people’s ears is to ask him, and hope he answers truthfully.”

It’s possible that the case against less overt forms of racism isn’t made eloquently and persuasively every single time, but it’s empirically not true that such accusations are based solely on say-so. For example, Touré himself rather famously called Romney out over the “anger” thing, claiming that the Republican nominee was evoking the “angry black man” stereotype with repeated references to President Obama‘s anger. The existence of the stereotype is not in doubt, nor are Romney’s references to anger, while the intent that Touré ascribed to Romney is supported, if not slam-dunk proven, by the fact that President Obama is not an angry guy, and by the fact that there is a political benefit to Romney in portraying him as one.

The welfare reform attack is much easier to pin down. Aside from the GOP’s long history of using welfare as a way to gin up racial resentment, Romney surrogate and Welfare Queen Czar Newt Gingrich helpfully decoded that issue earlier this year when he singled out “the African American community” for being “satisfied with food stamps,” and Romney similarly gave away the welfare attack with his NAACP speech and “free stuff” follow-up.

Making welfare an issue would be dodgy, but defensible, if it were true. The real smoking gun is that the welfare attack is a lie. The Romney campaign made a conscious decision to make welfare an issue in this campaign based on utter falsehoods, within a much broader context of racially charged attacks.

There will still be some who are unpersuaded by the facts and evidence presented here (and elsewhere), but it isn’t just someone saying so.

“I applaud people, many of whom are my colleagues, who tackle racial inequality, but there are many better ways to do it.”

There are many ways to tackle racial inequality, but pushing back against the normalization of less overt racism is important, and precisely because it is difficult, or at least more difficult that listening to a confession, or reading a conspiracy-revealing email. I don’t begrudge Mitt Romney his defenders, but if he’s going to belong to the party he belongs to, and make things up about our first black president handing out welfare checks, then there also need to be people willing to call him out.