S.E. Cupp Takes Joan Walsh To Task Over Liberal Hopes That Boston Bomber Would Be White 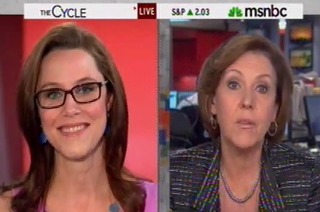 Co-host of MSNBC’s The Cycle, S.E. Cupp, grilled Salon writer Joan Walsh on Tuesday over hopes expressed by some in the left-of-center media that the Boston bombing suspects would be identified as white conservatives. Cupp asked Walsh to explain why outspoken liberals were so keen to link the Boston bombing with white people and conservatism in wake of the attack. Walsh replied that incidents of prejudice and discrimination would be reduced if the bombers had turned out to be white.

“We’re spending all this brainpower trying to figure out what sort of racial, ethnic box we can put these guys into,” said Krystal Ball of the Tsarnaev brothers. “Why is that important and why is it so hard to figure them out?”

“In the end, it’s not important,” Walsh replied. “I really do think that this whole discussion shows us – you know, proves once again that race is entirely a political and social construct.”

She added that the Tsarnaevs’ crime is more akin to mass shootings committed primarily by white people. “We really don’t want to acknowledge these boys have as much in common with Timothy McVeigh and – actually, more to the point, with school shooters. The Columbine killers, James Holmes then really they do with hardened jihadis.”

Cupp asked Walsh about a column by David Sirota openly hoping the Boston bomber would be identified as white. She cited a number of tweets and statements from prominent media figures expressing a similar desire.

“I don’t know if I find equal problem with it,” Walsh replied. “If it’s a white America, whites are just not profiled the way, you know, the way other groups are.”

“One of our many privileges is [that] we’re just individuals. Those are crazy nuts over there, we don’t have to answer for them,” Walsh said. She noted that when mass violence is committed by minorities it is often accompanied by a “wave of paranoia, and profiling, and prejudice” that would not occur if the criminal was white.

“But the wave of paranoia and prejudice is also fomented on the left by folks like David Sirota,” Cupp countered.

“I don’t see it that way,” Walsh answered. “All we can see is what we have here and, in that sense, David was right.”