S.E. Cupp Tears Into MSNBC Panel On Whether GOP Leaders Should Condemn Birthers In Congress
video

S.E. Cupp Tears Into MSNBC Panel On Whether GOP Leaders Should Condemn Birthers In Congress 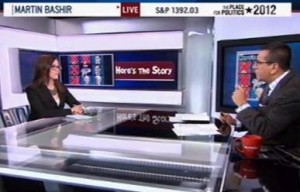 It has been almost a year since President Obama finally released his long-form birth certificate and shut up most of the “birther” crowd (even Donald Trump was shaken off his axis for a spell). But believe it or not, birthers and their sympathizers still exist. On MSNBC today, Martin Bashir brought viewers’ attention to Congressman Cliff Stearns, who recently expressed sympathies with the birther movement, and got into a heated panel discussion over who in the Republican party should be holding people accountable for these statements.

RELATED: Santorum To John King On Birthers: ‘I Don’t Feel An Obligation’ To Refute Them

Michael Eric Dyson started out by quoting a few Stevie Wonder lyrics to make the point that “superstition” is what people fall back on when they are “anti-science, anti-rational, anti-reason, post-enlightenment, faith-filled bigots.” He found it hard to believe that anyone who believes in empiricism would still, at this late date, be touting such a ludicrous conspiracy. But Dyson made sure to state, especially in light of polls from both Alabama and Mississippi showing that a majority of voters believe Obama is a Muslim, that anti-intellectualism is not just relegated to the South; it exists all over the country.

Bashir reminded viewers that unlike Stearns, Obama’s chief rival in 2008 actually pushed back against the conspiracy theorists. John McCain famously told a supporter who believed Obama was an Arab that he was a good American who he simply had political differences with. Bashir asked S.E. Cupp why Republican leaders like John Boehner aren’t publicly condemning birthers, or at least telling them their information is inaccurate. Cupp said it’s because that’s not their job, adding that voters will ultimately decide whether birthers in Congress will keep their jobs or not. Bashir argued that sitting members of Congress should be held to a certain standard, and if a party member makes an objectively absurd statement as Stearns did, he should be publicly rebuked by the leadership.

Cupp shot back that members of the Democratic party have made similar eyebrow-raising statements in the past. Julian Epstein disagreed, pointing to when MoveOn.org infamously called General David Petraeus “General Betray-Us” and some Democrats came out and condemned it. Cupp said that it’s only been a smattering of Republicans that have waded their toes into the birther pool, but Epstein said it’s been a surprisingly large number of Republicans who have shared birther leanings. Epstein suggested that the Republicans risk hurting their chances among independents if their members keep saying things like this about the president.

Cupp interjected to point out that none of the candidates running for president have ever expressed doubts about Obama’s birth certificate. Bashir brought up Donald Trump’s endorsement of Mitt Romney, but Cupp said that still doesn’t prove a strong connection between birtherism and the Republican candidates.

Watch the full segment below, courtesy of MSNBC: