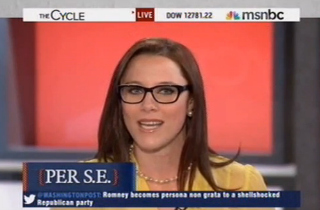 During her closing monologue of today’s edition of MSNBC’s The Cycle, conservative co-host S.E. Cupp unloaded on the anti-Obama secessionist movement that emerged following the president’s re-election, likening them to petulant children who need to grow up and move on from the electoral defeat in a more productive manner.

“I think, as footage proves, I was unreserved in expressing my disappointment that President Obama won re-election. I have been a stalwart defender of the conservative principles he’s opposed and I’ve been critical of his failures,” Cupp began before tearing into the secessionists: “But I am also not a petulant child. That’s one way I describe the secessionist movement.”

She continued: “With all due respect to my fellow conservatives-in-arms who are choosing to deal with this loss by threatening to leave the country and take a state or two with them, may I just say: Go to the corner, you need a time out.”

Cupp then suggested that the secessionists learn a thing or two from other conservatives, like herself, who have moved on from the defeat in a different way: “On the morning after the election I woke up, ate breakfast, put clothes on, and got back to the business of living my life. Yes, it’s under a president whose policies make my blood boil, but I don’t think moving to Canada would solve much of anything unless, of course, it means I automatically get stock in Canadian bacon,” she joked. “Nor do I think attempting to break up our great union into pieces so I need a passport to go to Wyoming is particularly productive.”

The monologue continued with more comparisons to petulant children:

There will be another election in four years. Even though many of these policies will be hard if not impossible to undo, I’d rather be an American than a “New Yorkian,” because that just sounds weird. Ron Paul has weighed in on the matter, writing, “Secession is a deeply American principle. That is what our Revolutionary War was all about.” Well, that’s true, but it was also about committing to the cause of democracy which, if implemented correctly, would call into question our values from time to time and would require us to disagree once in a while. We didn’t say “We the People of the United States in order to form a more perfect union until we don’t like it anymore at which point we’ll take our toys and go home.” This thing was built to last. We were in it for the long haul. We knew we’d have to work for it. And that’s what I’m going to keep doing because when things don’t go our way, we don’t pout in the corner like children. We put on our big boy pants and get down to business, and now more than ever we need to commit to our great country. We need to commit to each other and find ways to disagree productively. This stunt is immature and unpatriotic and I resent it.

She then concluded with a lighthearted stab at her liberal co-hosts: “I mean, if i can come in here day after day and face these three lunatics, clearly you can find a way to move on, too.”