S.E. Cupp: U.S. ‘Paying for Our Inaction’ in Syria More Than for Military Strike 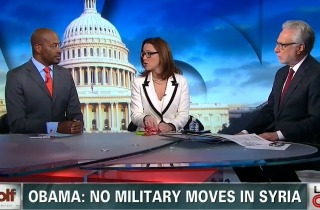 On the heels of a series of figures close to President Barack Obama expressing doubts about the long-term viability of the president’s approach to the ongoing civil war in Syria, CNN host Van Jones and S.E. Cupp sat down with anchor Wolf Blitzer to debate the merits of Obama’s Syria policy. Cupp said that the United States will be paying a heavier price for its military inaction in Syria than it would have had it intervened in the crisis.

Cupp insisted that the president has not kept America out of the Syria conflict because he has rhetorically committed the United States to a course of action. “We are both in and out and our inaction and confusion has made this a more dangerous conflict,” Cupp asserted.

RELATED: Jon Karl to Jay Carney: When Can We Admit Obama’s Syria Policy an ‘Absolute Failure?’

“We are now in a situation where we have to have a regroup and a reset,” Jones agreed. “This disaster in Geneva, I think, opens a new chapter.”

He added, however, that there is no military solution to the conflict and the only course for the U.S. is to criticize Russia for blocking humanitarian aid shipments to affected areas in Syria. “I would rather for us to stumble on the way to peace than to blunder into another war,” Jones said.

Jones asked Cupp if she thought the U.S. would be “better off” if it were engaged in another land war in the Middle East.

“I think we are going to be paying for our inaction far longer than any surgical military action now,” Cupp said. “That would be a tough decision, but the right thing to do.”