S.E. Cupp, Van Jones Battle Santorum, Lieberman on Syria: ‘Whoa, You Are Not That Naive’ 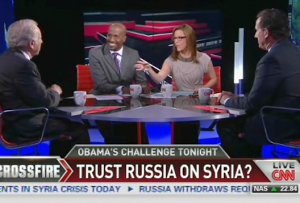 The second night of Crossfire 2.0 was far more energetic than the first, with S.E. Cupp and Van Jones conducting a fiery discussion on Syria with former senators Rick Santorum and Joe Lieberman. Cupp called out Lieberman for sounding “naive” regarding potential boots on the ground, while Jones got into it with Santorum over the United States’ handling of the threat from Iran.

Lieberman jumped in during the debate to say “war” is the wrong word to use, since “nobody’s talking about war” and Obama assured there would be no boots on the ground. Cupp jumped in, telling Lieberman “you are not that naive,” arguing that the second a U.S. military plane goes down over Syria, boots will be sent in. Lieberman insisted any action will not lead to a “massive land invasion.”

Jones pressed Lieberman on why he doesn’t believe Obama should have to go through Congress. Lieberman argued the president can unilaterally act, but by taking the “enormous risk” of going to Congress, he’s now stuck in a “quagmire.” Lieberman lamented how “confused” the public is about what’s going on, but Santorum blamed that on Obama for his increasingly muddled and mixed messages on Syria, warning about potential retaliation from Iran leading to a “broader war with a president who is clearly in over his head.”

Jones started touting how Obama “got Russia and CHina to be with us against Iran,” before Santorum said, “Stop right there!” They fought back and forth over what the U.S. has done to respond to the threat from Iran, with Santorum declaring, “We have drawn a red line with Iran and we have done nothing publicly.”