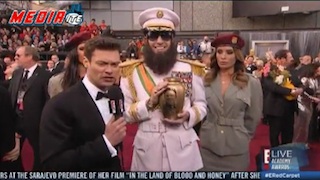 Following up the outrageous pranks of Borat, Bruno, and Da Ali G Show, Sacha Baron Cohen is moving towards scripted hijinks with his latest, The Dictator. However, he got one last surprise gag in back in February when he attended the Oscars in character and pretended to spill the ashes of the recently deceased Kim Jong Il all over Red Carpet host Ryan Seacrest who, as those watching at home could see, didn’t seem to find the joke at all funny. Don’t worry though, there’s no more bad blood as Baron Cohen apparently made a point of apologizing to Seacrest this past Saturday.

RELATED: Sacha Baron Cohen Arrives At The Oscars As ‘The Dictator,’ Dumps ‘Ashes’ On A Very Unhappy Ryan Seacrest

Speaking to E! Online, Seacrest explained how the comic actor broke character after his surprise cameo on Saturday Night Live, to apologize for ruining his nice tuxedo:

“Seacrest said the comedian then walked right by him and out on stage to perform his bit on ‘Weekend Update.’ When it was done, he made a beeline straight for the E! News man.

‘He comes off stage, comes over to me, breaks character and says sorry about the Oscars, it wasn’t personal,’ Seacrest relayed, adding that Cohen was ‘very very apologetic and genuine and kind and sweet.'”

Hold up. Ryan Seacrest just gets to chill off camera at the SNL set? No wonder the guy’s been taking those NBC jobs.

Anyway, Seacrest also explained that the Oscars prank was originally intended for George Clooney but Baron Cohen changed his mind considering Clooney was up for a few awards and would have probably not been too thrilled to accept them covered in ash. Yeah, I can see how that could have gone poorly.

Check out the original prank video below and Baron Cohen’s SNL appearance here.