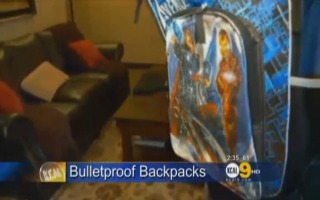 CBSLA reports that in the days since the elementary school massacre in Newtown, Connecticut, sales of bulletproof backpacks have soared. Made by a Salt Lake City company called “Amendment II,” the packs are lined with carbon nanotube armor, the same material used in vests worn by soldiers and police officers.

Rich Brand, COO of Amendment II, says the company used to sell just a few backpacks at gun shows but that has changed nearly overnight:

“Anyone who is sending the child out in the world seeing what can happen now, they want to protect their children. The concept came up as things happened at schools. Children need protection as well.”

“Our goal has always been from the very beginning of this company is that we wanted to save lives, whatever level that is, we don’t care, whether that is children or military or Secret Service or whoever it is. Our passion and our goal and our science behind it is that we want to save lives.”

According to the product description, the backpacks may be used as a shield to protect the front of the body or “serve as center of mass protection while fleeing the scene of the shooting.” Demand has risen so quickly that the company’s website crashed.

The product, which can cost up to $300, is called the “Ballistic Backpack” and was initially offered for boys, girls and teens but sold out of certain designs. Amendment II also offers a tactical vest for children and armor products for adults.

Watch the full clip below, via CBSLA: