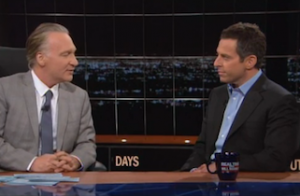 Real Time with Bill Maher welcomes an all-liberal panel Friday night, who were mostly in agreement about the problems with Republicans. So author Sam Harris was the closest thing the show had to a dissenting voice.

He went to say that “our fascination with the Second Amendment just looks like masochistic stupidity.” But at the same time, in our political system, you get the “watered-down version” of gun laws that he believes will not make any big difference in reducing gun violence.

Newark Mayor Cory Booker took some offense to Harris’ outlook, chiming in with “that’s where I just disagree.” He made the point that the “data should drive our decisions” and his data shows that crimes with guns are being committed by people who bought them illegally on the secondary market, without background checks.

Harris then set up another curious contradiction by saying “the NRA is an odious organization” that should “just be crushed.” But at the same time he defended Wayne LaPierre‘s premise that “the only thing that stops a bad guy with a gun is a good guy with a gun.”

Booker fired back that “this argument is dangerous” because if you decide nothing we do can ensure the prevention another tragedy, then we won’t do anything. In return, Harris called it a “fantasy” to think that banning assault weapons would prevent another Newtown.